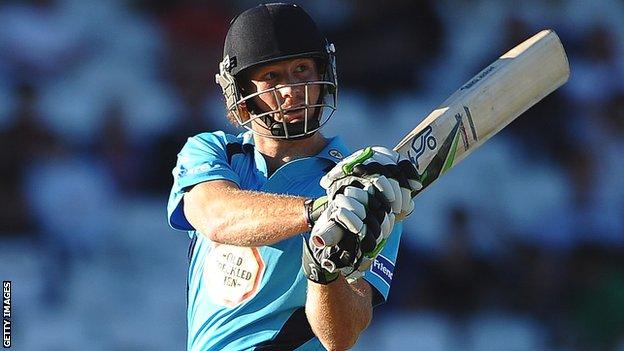 Derbyshire head coach Karl Krikken says New Zealander Martin Guptill is open to a return to the club in the future, but not for this season's Twenty20.

The 26-year-old has hit successive centuries in the one-day series with England, including 189 on Sunday.

Coach Karl Krikken said: "Martin has made it clear that he loves it here, that Derbyshire is his club and that one day he'd love to play for us again.

"I'm sure I'm joined by everyone in looking forward to the day it happens."

Guptill, who will play in the Caribbean Premier League (CPL) following the upcoming Champions Trophy tournament, averaged 40 in 16 first-class matches for Derbyshire spread across 2011 and 2012.

Kirkken added: "We made no secret of our ambition to sign Martin as our second overseas player for the Friends Life T20 campaign and, while we are disappointed it won't happen this season, it's great to hear that the player has ambitions to return in the future.

"We were delighted to present Martin with his County Championship Division Two winners medal ahead of our tour fixture versus New Zealand earlier this season - a moment he richly deserved for his fine contribution to the success.

"The international and domestic Twenty20 schedules around the world can make opportunities limited.

"The CPL competition in the West Indies provides Martin with the ideal shop window in which to display his talents, with a view to possible future involvement in the lucrative Indian Premier League. Good luck to him for a successful tournament."