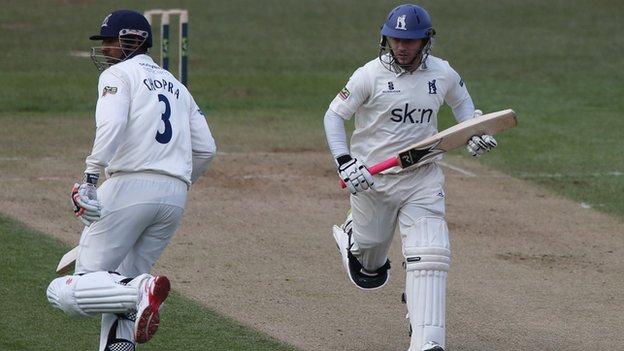 Chopra batted all day for a superb unbeaten 187 as the rampant Bears finished the first day on 359-3.

He was supported in two big stands, first with Ian Westwood, who hit 71 as they shared 153 for the opening wicket.

Tim Ambrose then weighed in with 64 in an unbroken partnership of 151.

Westwood's innings was the morning highlight on his return to action after a six-week-long absence with an ankle injury.

But Chopra then took over, hitting his best score since his title-sealing 195 at New Road last September.

Surrey made to suffer again

The former Essex batsman is also just 46 short of his career best 233 not out for the Tamil Union against Sinhalese in Colombo, Sri Lanka in January 2012.

Even the return of Surrey's South Africa-born England limited-over paceman Jade Dernbach made no difference to the Bears' serene progress.

After his release from England's one-day squad on duty at Trent Bridge, Dernbach drove from Nottingham to take Surrey's second new ball on his home town ground half an hour after tea.

But, coming on the back of the pummelling he took from New Zealand's record-breaking batsmen at Southampton on Sunday, Ambrose dispatched Dernbach's first delivery from the Pavilion End through extra cover for four - and his six overs went for 30.

Warwickshire may also have fast bowler Boyd Rankin back from Trent Bridge to join the game on the second day as a replacement for Tom Milnes, after spending the day on England duty.

With Stuart Broad and Steven Finn reporting fit, Rankin was not needed at Trent Bridge - and he has been handed permission by the England and Wales Cricket Board to head from Nottingham to Guildford.

But continuing concerns over Finn's fitness ahead of Saturday's Champions Trophy opener against Australia at Edgbaston may mean that Rankin is held back.

"Winning the toss on a day like today was a stroke of luck for Warwickshire, but they had to bat well to make the most of it.

"Varun Chopra has made some big scores for the Bears in the last couple of years, but can't often have played better than this, however benign the conditions.

"His cover driving was stylish and his pulling powerful, and he took a harsh toll on any bowler whose length was awry.

"Ian Westwood kept pace with him for the first half of the day and Tim Ambrose pushed the score along in the final session."

"Varun Chopra has dominated the opening day at Guildford. On a very good batting track he looked in complete control, batting the whole day and finishing 187 not out.

"It was a chanceless innings and he was given valuable support from Ian Westwood and later in the day Tim Ambrose.

"The Surrey bowlers had a frustrating day, including Jade Dernbach who arrived from Trent Bridge and immediately took the second new ball.

"It looks a pitch that will be hard work for all the bowlers and Surrey know they will have to try and contain the first innings of Warwickshire tomorrow by taking wickets in the morning session."