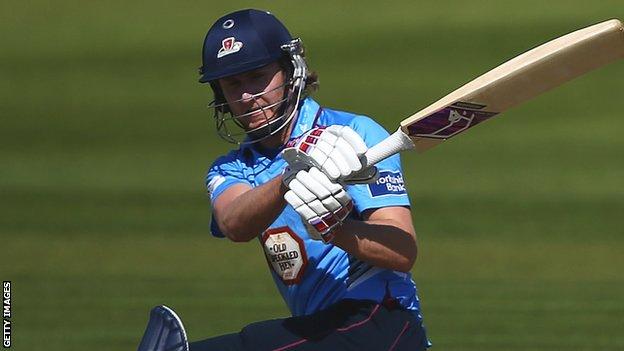 Northants captain Alex Wakely insists he is not overly concerned by the injuries in the squad while their replacements impress.

Rob Newton picked up an ankle injury in the YB40 win over Kent Spitfires.

Meanwhile, Steven Crook is having his back assessed on Monday ahead of Wednesday's County Championship match against Worcestershire.

Wakely told BBC Radio Northampton: "It is a slight concern but the guys who've come in have performed."

The captaincy allows me to enjoy my batting

He added: "We're trying to rest bowlers to give them the best opportunity to stay fit for the whole season.

"But Lee Daggett has been chomping at the bit to get in the Championship and one-day side."

The Lancashire-born seamer took 2-28 in a controlled display at Tunbridge Wells.

"I'm really pleased for him because he's been comfortably our best bowler in the last two games," Wakely said. "He knows exactly what he's doing and he knows where he wants the fielders."

The Steelbacks are up to third in their YB40 group after three consecutive wins, with Wakely hitting 102 in the latest victory.

"It was comfortably the best [one-day] batting performance of the season," he continued. "I felt like we've been leading up to this in the past couple of games.

"I've felt a bit short of runs in the last few months so you enjoy it when you go like that. The captaincy allows me to enjoy my batting."

"Andrew Hall will come back in, but we'll be minus Rob Newton," added Wakely.