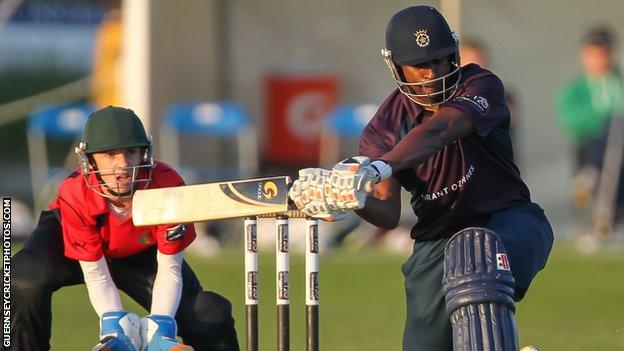 Guernsey Premier League champions Mourant Ozannes are out of this year's tournament after three defeats.

Despite having England limited overs international they failed to win any of their matches over the weekend.

They lost Ravenscroft Warriors by 14 runs in the competition's opening game.

They were then beaten by BDO by five runs before losing the return fixture to Warriors by 38 runs at Port Soif, leaving them bottom of the table.

It meant next week's final will be between BDO and Warriors, with Warriors looking to avenge an eight-wicket defeat in their round robin game.

Warriors made 134-5, batting first, as Jeremy Frith hit 77 off 63 balls, including five fours and three sixes, while Jordan Martel took 2-29 for BDO.

Frith's score was the second highest of the weekend, only bettered by teammate and visiting professional Anthony McGrath, who hit 87 in their win over Mourant Ozannes on Friday.

In reply BDO's professional, Will Beer, from Sussex, top-scored with 53 off 35 balls, including five fours and a six, while Isaac Damarell scored 46 not out as they reached their target for the loss of just two wickets with 11 balls to spare.