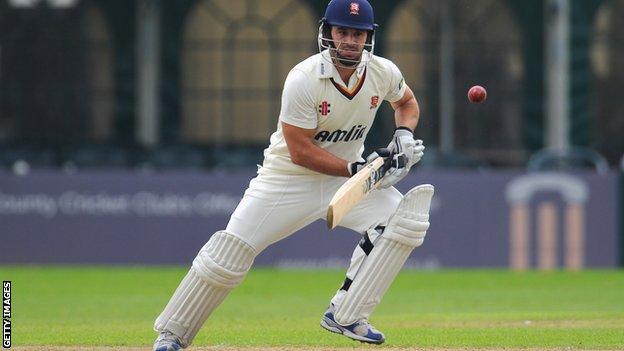 Ryan ten Doeschate blazed a stunning 180 off 98 balls to lead Essex to a Yorkshire Bank 40 win over Scotland.

He struck 15 sixes and eight fours in his best limited-overs score for Essex.

The Dutchman then claimed 2-38 as Scotland were limited to 243-8 as Essex claimed victory by 125 runs.

The pair slaughtered the Scotland attack during an innings that totalled 23 sixes and 23 fours.

Rutherford launched his Essex career with a wonderful display of clean and powerful hitting facing just 88 balls that included six sixes and nine fours while Ten Doeschate was typically aggressive.

His century arrived from 72 balls with six sixes and five fours and, when it ended 26 balls later, his innings boasted 23 boundaries, of which 15 cleared the ropes.

The Saltires' problems were compounded when umpire Steve Garratt ordered Calvin Burnett out of the firing line after the bowler had been called twice for beamers in one over that had cost 28 runs.

It left captain Preston Mommsen to complete the over with a further two deliveries that cost another five runs.

Mommsen, though, suffered heavily as Ten Doeschate went into overdrive hitting the bowler for four successive sixes and a four in one over.

The rousing run-fest between Rutherford and Ten Doeschate finally ended when the former was caught going in search of another boundary with the score on 279, while Ten Doeschate's wonderful knock came to a close 55 runs and four overs later when he was bowled by Michael Leask.

Having put their hosts into bat, Scotland started well. Calum MacLeod had removed Tom Westley with the fourth ball of the match, while Owais Shah, making his first appearance after his stint in the Indian Premier League, was also dismissed for a duck after Mark Pettini had been caught for 23.

At that stage, the Eagles were 49 for three in the 11th over, but that was the final cause for celebration for the Saltires' bowlers who were treated with disdain thereafter.

The home side retained their vice-like grip on the match when they took the first four Scotland wickets inside the opening 10 overs of the reply at a cost of 55 runs.

He removed both batsmen in successive overs leaving the visitors on 124 for six and then ended a 39-run stand for the seventh wicket when he ran out Moneeb Iqbal.

Matthew Cross then ensured a modicum of respectability for his side with an unbeaten 54 in an unbroken partnership of 72 with Burnett, but Scotland finished well adrift of their target.