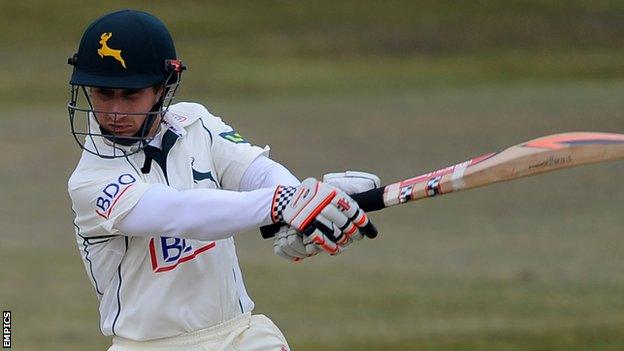 James Taylor fell three runs short of a ton as Nottinghamshire asserted their dominance on day three against Sussex.

Harry Gurney's hat-trick mopped up the Sussex tail quickly as the hosts added 26 from their overnight score to finish on 306, 50 runs behind Notts.

Taylor and Ed Cowan (81) put on a devastating 151-run partnership as the visitors continued to control.

Magoffin had an opportunity to emulate Gurney, on a hat-trick with one wicket left to fall, but Franks whipped the ball away for four on a day when the visitors frustrated Sussex.

Following Gurney's early bowling efforts, Notts wobbled in the early stages of their second innings and were 24-2 at one stage.

But Taylor and Cowan steadied their innings, before falling to Chris Jordan and Chris Nash respectively.

It was the second time this season former Leicestershire man Taylor has fallen for 97 this season, after coming equally agonisingly close to a century against Durham in April.

Franks was the only other Nottinghamshire batsman to make any real impact - with the next highest score being Samit Patel's 18 - but the visitors appear in total control going into the final day.

"It was a stunning performance by Harry Gurney to end the Sussex first innings in such dramatic fashion with a hat-trick.

"Aided by stunning slip catching, Gurney's feat is the first by a Notts bowler since 2006 and only the 10th since World War II.

"Notts' batting has now given them a real chance, although it promises to be a tense final day with Sussex eager to keep their unbeaten start."