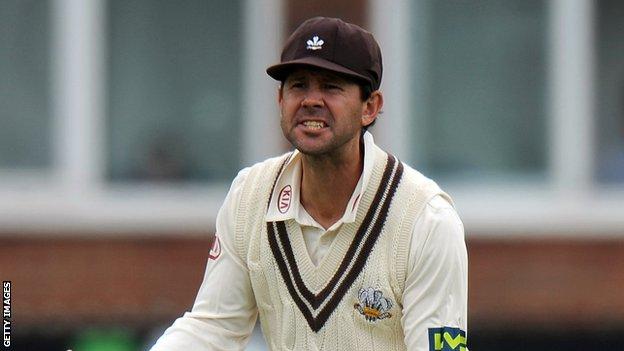 Ricky Ponting's wonderful debut batting display for Surrey could do little to prevent a draw in the clash of Division One's bottom two at Derbyshire.

Former Australia captain Ponting, resuming on 120, forged a 105-run partnership Steven Davies as Surrey surpassed the hosts' 452 all out.

Ponting's resistance was broken when he was run out by Richard Johnson on 192 and Surrey declared on 553-8.

Derbyshire had reached 164-3 when the captains shook hands.

The result - which leaves both sides still searching for their first Championship victory - looked inevitable as soon as Chesney Hughes' 68 saw his side past the 101 needed to avoid an innings defeat, in a game which lost much of the first day to rain.

However, the match with be remembered for Ponting's captivating performance, which included 20 fours but no sixes, as he narrowly missed out on his 10th first-class double ton but secured the highest total made by a Surrey player on first-class debut.

The 38-year-old's incredible 180-run third-wicket stand with Arun Harinath on day three provided ample evidence to suggest that he could settle well at Surrey, and helped move his side to within a point of seventh-placed Somerset.

The Australian, who scored 13,378 Test runs for his national side before retiring from international cricket last November, is on a two-month deal at the Oval while skipper Graeme Smith is on international duty with South Africa.