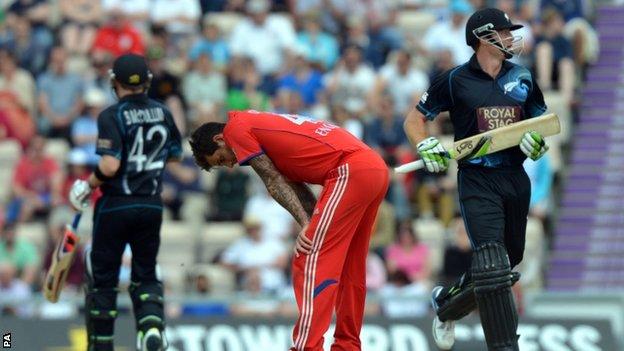 England slumped to a one-day series defeat by New Zealand as Martin Guptill's second successive century condemned the hosts to a 86-run loss.

Guptill, 26, hit an unbeaten 189 - the joint-fifth best one-day international score as New Zealand finished on 359-3 - their highest total against England.

Jonathan Trott top-scored with 109 not out but England batted poorly and were dismissed for 273 in the 45th over.

The final game of the three-match series is at Trent Bridge on Wednesday.

Having lost by five wickets in the first international at Lord's, the manner of this defeat will be of concern to captain Alastair Cook ahead of their opening Champions Trophy match against Australia on Saturday.

The series defeat is the team's first at home since 2009 and comes a week after they clinched the Test series 2-0.

"Clearly we have been outplayed in these two games," said the skipper, who lost the toss again.

"It has hurt us but we need to learn why and, with the tournament coming up, get better than we have been in these two games."

The bowlers, albeit without the injured Steven Finn and Stuart Broad, have not looked threatening, while the batsmen have failed to build big totals after settling in.

The tall pacemen could return for the dead rubber at Trent Bridge, but their absence has exposed England's lack of depth in the bowling department.

At the Ageas Bowl, stand-ins Jade Dernbach (0-87) and Tim Bresnan (0-73), and the more experienced James Anderson, forgot the basics of good line and length on a pitch made for batting.

Anderson finished with average figures of 2-65, although those two victims took his one-day international tally to 243, to tie with Darren Gough as England's leading wicket-taker in the shorter game.

"These were two very heavy defeats. A five-wicket loss at Lord's and now an 86-run defeat here. New Zealand can go away with their heads held high. They'll go into the Champions Trophy with confidence and belief. They have done it easily. England are really struggling - where do they go from here? They can't change their squad. They need to bat, bowl and field better. The only shining light was Trott."

The Lancastrian took the opening wicket when his delivery found a gap through Luke Ronchi's defence to leave the tourists on 12-1.

Guptill should have gone for 13 soon after, but Trott fumbled his flashing drive at head height.

The Auckland-born player and Kane Williamson (55) put on 120 before the latter bottom-edged Graeme Swann (1-61) on to his stumps.

Ross Taylor then provided great support for Guptill, who went on to record his second ton in successive matches from 111 balls.

Taylor made his mark with his 23rd one-day 50 before he tried to launch Anderson's delivery out of the ground, but instead found Chris Woakes at the square-leg fence.

Guptill, now supported by his captain Brendon McCullum, then re-wrote the record books at regular intervals en route to his magnificent 189.

First, he set the highest score in one-day cricket by a New Zealand batsman against England when he reached 140 before helping his country to their highest total against the opposition when they surpassed 340.

Guptill then passed 172 to usurp Lou Vincent at the top of the New Zealand high-scores table before finishing the day with an unbeaten 189 from 155 balls - the joint-fifth highest total in one-day game, alongside West Indies legend Sir Viv Richards and Sri Lanka's Sanath Jayasuriya.

His skipper, who was dropped by Trott on the boundary rope, smashed 40 from 19 balls as the tourists made 132 from the last 10 overs.

Jade Dernbach's wicketless 10-over spell for 87 runs was the fourth-most expensive return by an England bowler in a one-day international. James Anderson holds three of the top-five worst figures, although Steve Harmison tops the list with 0-97 v Sri Lanka in 2006.

The openers began well and looked comfortable, reaching 50 before Cook (34) was deceived by a Kyle Mills ball that cut back and then Bell inexplicably lofted one into the hands of James Franklin to leave England on 64-2.

Trott and Root (28) made 58, before the Yorkshire youngster launched Nathan McCullum's delivery straight to Doug Bracewell at long-on.

The final five wickets fell for 61 runs, with Trott finishing unbeaten on 109 from just 104 balls - not bad for a player some still reckon is not suited for the one-day game.

But the day belonged to Guptill, who unsurprisingly was named man of the match.

"It's an incredibly proud moment for us. Credit to how Martin has played in these two games," McCullum said.

"When he's going there are a few guys round who strike the ball as cleanly as he does. Any time you score 189 in a one day game you deserve to come out on the right side of the result."