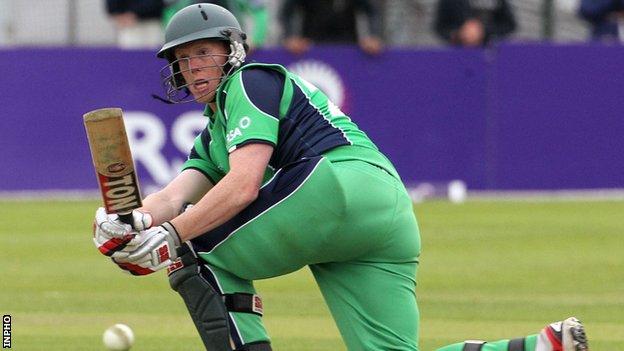 Kevin O'Brien scored an unbeaten 71 from just 51 balls as his Leinster Lightning side crushed the North West Warriors by 149 runs at Malahide.

Skipper O'Brien made the most of a reprieve when dropped on 44 as Leinster added 40 runs in the last three overs of their innings to finish on 272-6.

North West were never in the hunt after losing early wickets.

They were dismissed for 123, leaving Leinster winners by a convincing margin of 149 runs.

Leinster had been given a perfect platform by an opening partnership of 118 between the Merrion pairing of Ben Ackland (78) and John Anderson (62).

The duo batted superbly, combining power and placement with some excellent running between the wickets.

Anderson hit seven fours and one hooked six, while Ackland repaid the faith shown in him by coach Trent Johnston, playing shots all round the wicket as he struck eight boundaries in his 78.

O'Brien played some magnificent trademark drives and pulls, hitting seven fours and two sixes as the North West wilted in the face of his onslaught.

Andy McBrine (3-40) was the pick of the North West attack, helping stem the flow of Leinster runs in the middle overs.

Scott Campbell top scored with 27, while Stuart Thompson (26) and Niall McDonnell (20) sparkled all too briefly.

Andrew Balbirnie (3-14) was the most successful of the Leinster bowlers, while Albert van der Merwe, on his 34th birthday, bowled superbly to finish with 2 for 23 in his ten over spell.

The NW Warriors are back in action on Tuesday when they play Northern Knights in a three-day Championship clash at Eglinton.

Peter Connell who suffered a pulled hamstring after bowling just 13 deliveries is likely to be replaced by Donemana professional Kamran Sajid.