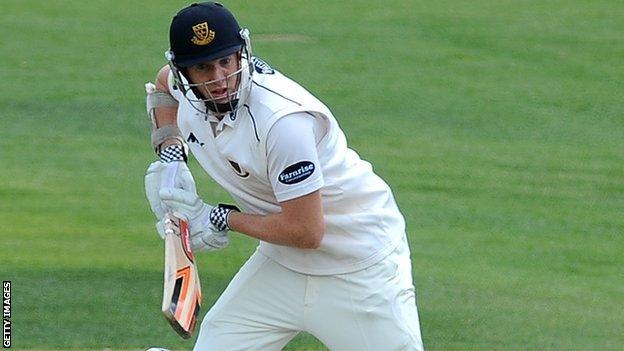 Luke Wells scored a classy 59 to rediscover his form with the bat for Sussex as they replied solidly to Nottinghamshire on day two at Hove.

The 22-year-old has had a few low scores since his 208 followed by 96 four weeks ago but set a good base for his side with an opening half-century.

Ajmal Shahzad (3-57) was the danger man with the ball and with Sussex 66 runs off Notts the game looks finely poised.

The former England bowler had earlier made his way to a half-century as Notts added 35 to their overnight total of 321.

Wells, who is averaging 73.50 this year, looked confident at the crease and shared partnerships with Chris Nash (22) and Michael Yardy (46).

Samit Patel chipped in with 2-63 for the visitors as plenty of the Sussex order got in and then got out.

But keeper Ben Brown and the reinvigorated Chris Jordan had a 41-run stand at stumps and will look to push on on day three.

"Ajmal Shahzad deserves the accolade as Notts' man of the day.

"Shepherding the tail he brought up his first half century for his new county, ensuring that a fourth batting point was gathered in the process.

"Then, with the ball, he claimed three vital wickets - with his pacy removal of Mike Yardy's off peg the most eye-catching."