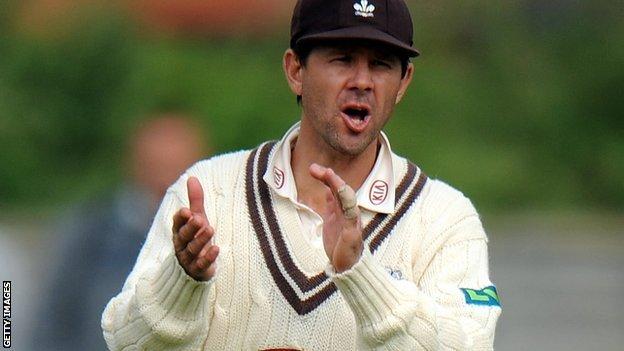 Ricky Ponting hit an unbeaten century on his Surrey debut as his side dominated the third day of their Division One match against Derbyshire.

The former Australian captain, 38, pulled Wes Durston away to reach three figures on his way to 120 not out.

He had earlier shared a mammoth 180-run partnership with Arun Harinath, who made 154 for his third Surrey century.

Derbyshire toiled in the field and with Surrey 362-4 at stumps in reply to 452, the game looks destined for a draw.

Surrey began day three on 35-1 having been dictated to by Derbyshire who saw Wayne Madsen and Shivnarine Chanderpaul both score centuries.

But the visitors proved just as capable with the bat as 26-year-old Harinath shared a 100-run partnership with 37-year-old Vikram Solanki, before Solanki fell for 35 to bring Ponting to the crease.

The Australian, who scored 13,378 Test runs for his national side before retiring from international cricket last November, looked set from ball one and played some gorgeous shots on his way to his hundred.

"It was worth the wait. Ricky Ponting treated us to a batting masterclass on his Surrey debut and moved to an effortless century in the Derby sun.

"He shared a third-wicket partnership of 180 with Arun Harinath, who also batted beautifully moving to his hundred with a straight six off Wes Durston.

"Harinath was eventually dismissed for a career-best 154, but Ponting eased his way to his century and will still be there in the morning on 120 as Surrey trail by 90 runs."