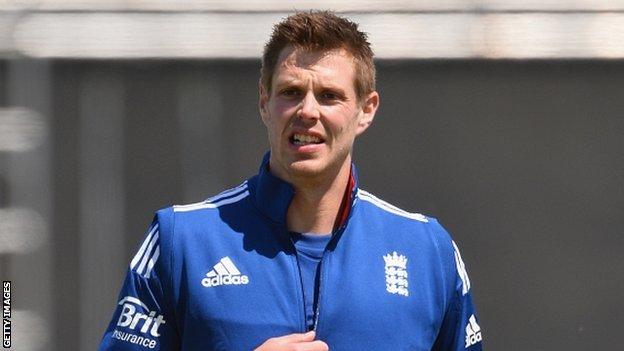 Warwickshire paceman Boyd Rankin has been added to England's squad for the final two games of the three-match one-day series against New Zealand.

Stuart Broad and Steven Finn missed Friday's defeat at Lord's and will also sit out Sunday's match in Southampton.

Rankin, 28, made his England Lions debut in 2011 and played 37 one-day games for Ireland before retiring from Irish cricket earlier this year.

Other seamers such as Welshman James Harris, now of Middlesex, or even Surrey's Stuart Meaker appeared to be above Rankin in the pecking order.

But captain Alastair Cook said: "James Harris did well when he came into the squad, and impressed everyone, but you'd have five bowlers of pretty much the same height and very similar skills.

"When you've got five bowlers, you want as much variety as you can in there.

"So when you lose two tall bowlers, you want to try to replace them with another tall bowler if you can."

Finn and Broad will be assessed ahead of the third and final one-day international on Wednesday at Trent Bridge.

Broad injured his knee taking a return catch to dismiss New Zealand captain Brendon McCullum at Headingley on Tuesday as England wrapped up a 2-0 Test series victory over the tourists.

Pace bowler Jade Dernbach and all-rounder Chris Woakes came into the side to replace Finn and Broad at Lord's on Friday.

Dernbach, 27, was called into the squad for the three-match series on Thursday to provide cover for Tim Bresnan, whose wife is due to give birth to their first child.

However, Bresnan was able to play at Lord's, in the process making his first England appearance since the end of January following a spell out of action to undergo elbow surgery.

Following the one-day series against New Zealand, England will take part in the ICC Champions Trophy as the host nation, with their first match against Australia at Edgbaston on 8 June.

That tournament will be followed by two T20 internationals against the Kiwis ahead of the Ashes, which begin on 10 July at Trent Bridge.