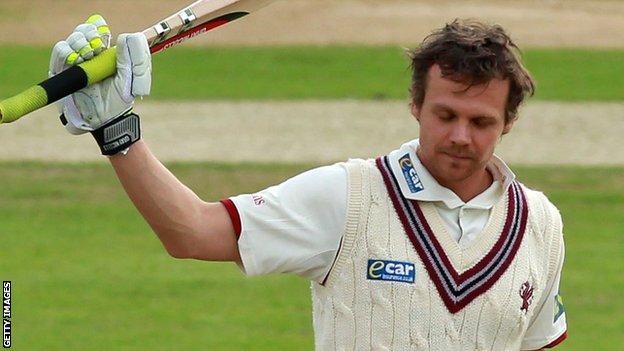 Yorkshire moved up two places to second in the table despite having to settle for a draw at Taunton after James Hildreth's century for Somerset.

Following the opening day wash-out, Yorkshire's only chance of victory was to enforce the follow-on.

Somerset needed to reach 301 to avoid the possibility and managed to total 310, thanks chiefly to Hildreth's 115.

The draw was enough to lift Yorkshire above Middlesex, Durham and leaders Sussex - but the south-coast club earned enough bonus points on the opening day of their game against Notts to ensure the Tykes would not keep top spot.

Somerset began the final day on 232-6, still 69 short of their immediate target, but added 40 to their total before Hildreth's 100-run partnership with Craig Meschede was ended when the latter was caught off Steve Patterson for 32.

Hildreth brought up his 28th first-class century off 150 balls before being bowled by Moin Ashraf and, although his side were three runs short of escaping the follow-on, they duly did so before Ashraf finished off the tail for figures of 3-60.

With nothing at stake other than to bat out time, Yorkshire were quickly reduced to 14-3, with Steve Kirby (2-19) dismissing Joe Sayers and Phil Jaques in the space of three balls, but first-innings centurion Lyth and Gary Ballance (31) added 70 as the game meandered to its conclusion, which arrived when Yorkshire declared.

After Ballance was caught on the boundary off George Dockrell, Lyth was joined for the final overs by Adil Rashid, who also made a first-innings hundred, and his five not out improved his seasonal average to 254.5.