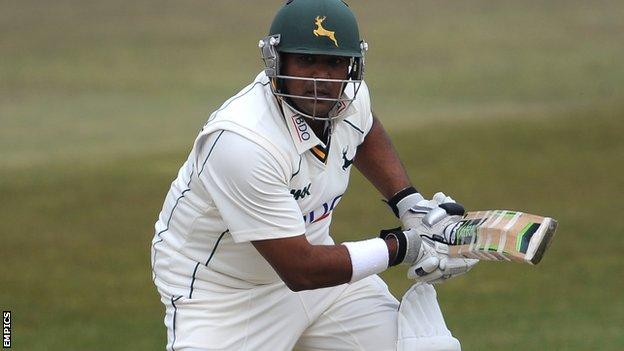 Samit Patel hit a magnificent 157 to rescue Notts from dire straits on day one against Sussex at Hove.

Sussex showed no effects from a late finish to their YB40 game the previous evening, reducing the visitors to 73-5.

Chris Jordan was the main threat with 5-83, but Patel played superbly to guide his side to 321-8 at stumps.

Sussex went into the game at the top of Division One and, with Jordan and Steve Magoffin bang in form with the ball, it was little surprise when they chose to field after winning the toss, even though cricket manager Mark Robinson had described their schedule as "ridiculous".

Jordan was given the new ball ahead of James Anyon and bowled Alex Hales in his opening over, before taking a catch to give Magoffin his first success as Michael Lumb was sent on his way.

James Taylor (11) and Ed Cowan (27) went in successive overs from Jordan, respectively leg-before and caught behind, and he later returned to remove Notts skipper Chris Read for 18, with the help of wicketkeeper Ben Brown.

Despite the perilous position, Patel was equal to everything Sussex could muster as he progressed to an 18th first-class hundred off 146 balls which, in the circumstances, was among his best for the county, but in the day's penultimate over he tried to hook a short ball and skied the ball to Ed Joyce.

"On his day Samit Patel is one of the most pleasing batsmen to watch in the county game.

"Today was one of those days - at time he made batting look effortlessly, a true hallmark of class.

"He couldn't do it on his own, of course. Paul Franks and Ajmal Shahzad hung around, helping him to add 200 for the seventh and eighth wickets but this was Patel's day, beyond doubt."