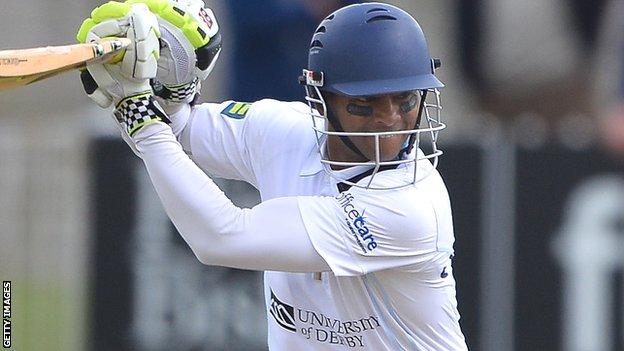 Shivnarine Chanderpaul's first century for Derbyshire helped them into a strong position against Surrey.

Surrey gave a Championship debut to Australian Ricky Ponting, for his first stint in county cricket since a spell with Somerset in 2004.

Bad weather delayed play until 15:15 BST and Chris Tremlett got rid of Chesney Hughes for a golden duck.

The two sides, who played out a rain-hit no-result in the YB40 on Wednesday night, had to wait until mid-afternoon for any play.

Hughes misjudged a straight one from Tremlett and fell to the day's fifth ball, and Derbyshire were soon in a bit of trouble on 29-2 when Godleman was caught at slip by Zander de Bruyn.

Madsen's 157-ball knock has contained 10 fours, while Chanderpaul has hit 13 fours in 136 balls at the crease.

"They came together after Chris Tremlett and Tim Linley had dismissed the openers and neither looked in trouble.

"Chanderpaul moved seamlessly to his century and, when bad light brought an early end to proceedings, Madsen was eight runs away from the milestone.

"Surrey know they will have to break the partnership early tomorrow."