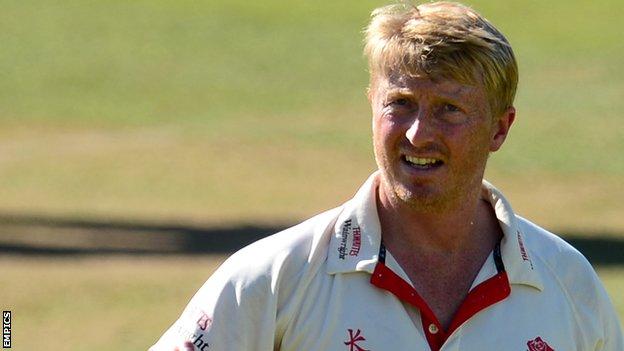 Chapple (2-45) had Michael Klinger caught by Andrea Agathangelou at second slip to reach the landmark figure.

Resuming on 175-4, Lancashire had earlier made 310 all out, with Simon Katich making 96 and Craig Miles taking career-best figures of 6-88.

Chapple removed both of the Gloucestershire openers, before Dan Housego (29) fell to Wayne White and Kyle Hogg dismissed Hamish Marshall to leave them struggling on 66-4.

But Gidman combined with Benny Howell to put on a stand of 77 for the fifth wicket to give their side a chance of at least getting close to matching Lancashire's score.

"An historic day for the Lancashire captain Glen Chapple who claimed his 900th first-class wicket and then quickly made it 901.

"The Red Rose will be pleased with their day's work. An excellent partnership by Kyle Hogg and Simon Kerrigan put on 66 for the last wicket and secured them a third bonus point.

"Chapple then took charge with the ball, reaching the milestone in front of an appreciative Liverpool crowd.

"Only Johnny Briggs and Jack Simmons have now scored more runs and taken more wickets for Lancashire than Chapple."

"Craig Miles once again showed his potential by picking up six wickets for the second match in succession. For the third match in a row he claimed his career-best.

"Gloucestershire, without spinner Ed Young who had to go to hospital with an injured wrist picked up the previous day, toiled against Lancashire's lower order.

"The visitors' batting then failed at first, but a resolute and disciplined fifth-wicket partnership between Alex Gidman and Benny Howell means they are not out of the match."