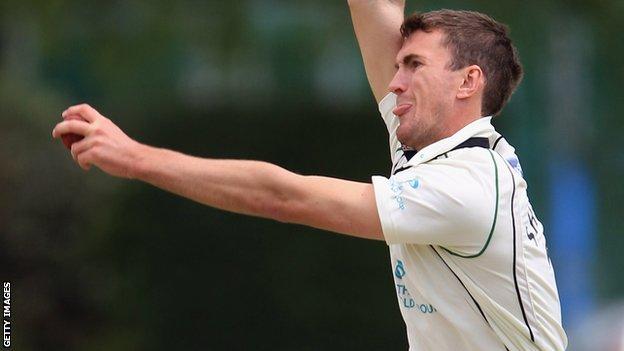 Worcestershire's Jack Shantry took 7-69 as Essex struggled to 215 all out on another rain-affected day at New Road.

With just 6.5 overs bowled in the first two days, the visitors resumed on 9-1, having already lost Jaik Mickleburgh.

Alan Richardson (2-84) dismissed Nick Brown and Mark Pettini cheaply, but it was Shantry who did the major damage.

Opener Tom Westley (90) and Sajid Mahmood (54) shared 91 for the eighth wicket before Shantry polished off the tail and rain cut the day short.

After Shantry's best figures in the County Championship, Worcestershire were just two balls into their reply when poor weather halted play.

"At last a Worcestershire bowler gatecrashed the Alan Richardson party and Jack Shantry's golden spell in mid-afternoon gave him his best championship figures.

"One chance apart, when Westley edged through the slips, the Worcestershire catching was also top drawer.

"If ever man deserved a hundred it was Westley who, Mahmood apart, was a class above the rest of the Essex batting before he holed out to long-on.

"Anything other than a draw seems out of the question and bonus points will almost certainly be the only ones gained after the first two days were all, but obliterated by the weather."