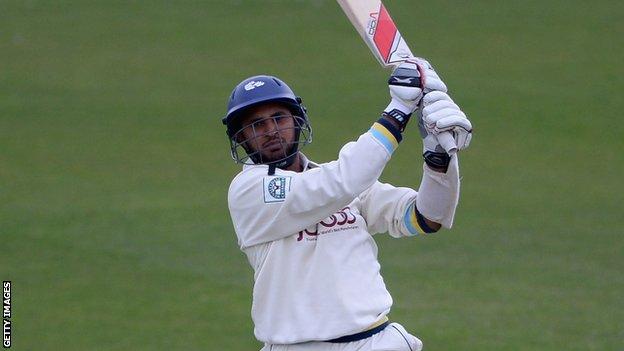 He followed a career-best 180 against the same opponents and 110 against Warwickshire with an unbeaten 103.

Rashid and Andrew Hodd (68) extended their overnight partnership to 170 before Yorkshire declared on 450-5.

Marcus Trescothick made 74 and James Hildreth an unbeaten 76, their best scores of the summer, as the home side ended day three on 232-6.

If they can avoid the follow-on by adding another 69 runs on the final morning, a draw would be the most likely result. Failure to do so, however, would leave the visitors scenting the possibility of victory.

Having resumed on 341-5, Yorkshire's first order of business was to progress to 400 before the end of the 110th over to claim maximum batting points and they did so with just one ball to spare.

Hodd was dropped at first slip by Trescothick on 41 and 50 and he kept Rashid company through to his century, which arrived off 119 balls, took him past 500 runs for the season and improved his seasonal average to 252, having only been dismissed twice in six innings.

Somerset soon lost Arul Suppiah and Lewis Gregory to Steve Patterson (2-48) in reply, but Trescothick - who began the game averaging only 27 - found a semblance of form, hitting 12 fours before he was lbw to Richard Pyrah.

South Africa Test player Dean Elgar only made 28 in his first innings for the county and although Alex Barrow and Peter Trego fell to successive balls from occasional spinner Adam Lyth, Hildreth and Craig Meschede (16 not out) prevented further damage by adding 60 before the close.

"There was little for the Somerset faithful to cheer about as the home team went wicketless, while the Yorkshire duo of Adil Rashid and Andrew Hodd saw them to maximum batting points.

"Scoreboard pressure was surely a factor as this largely youthful Somerset side ended the day needing another 69 runs to avoid the near-certainty of being asked to follow on.

"There were signs of the vintage Marcus Trescothick in the Somerset skipper's 74, after which James Hildreth looked in prime form during his unbeaten 76.

"Much depends on him and the continuing support of Craig Meschede, while the new ball, due after eight overs tomorrow, could be a significant factor."