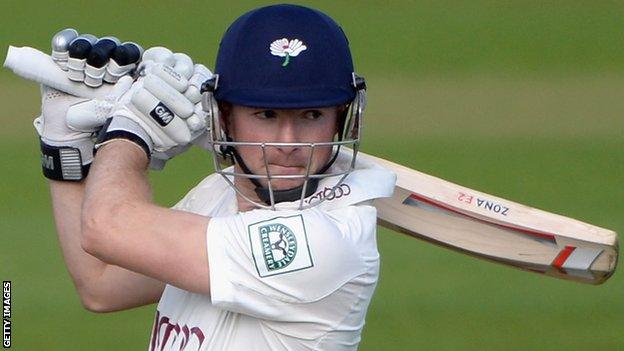 After a first-day wash-out, Joe Sayers edged to slip for one but Lyth and Phil Jacques rebuilt until the Aussie was caught behind with the score on 82.

Lyth had reached his ton in a 103-run stand with Andrew Gale when he fell to Gemaal Hussain and Somerset hit back.

Gary Ballance (48) knicked behind and Gale (75) played on after taking the score past 250, leaving Adil Rashid and Andy Hodd to guide Yorkshire to stumps.

Yorkshire won the toss and elected to bat and may have been regretting that decision when Sayers edged Steve Kirby to Marcus Trescothick at first slip in the second over of the day, leaving Jacques and Lyth to provide the visitors with a platform.

They duly obliged, Lyth racing to his 50 from just 65 balls before Jacques knicked Hussain to the wicketkeeper and skipper Gale set about partnering Lyth to his maiden century of the campaign.

Once the opener had departed after pulling Hussain straight down the throat of Peter Trego, Gary Ballance played an uncharacteristically patient innings but fell two short of what would have been a deserved half-century when he feathered George Dockrell's left-arm spin behind.

Gale quickly followed after dragging Trego onto his off-stump but Rashid (47 not out) and Hodd (24) kept up the momentum by adding 65 from just 80 balls before the umpires called a halt at 341-5 on what had been an uninterrupted second day.