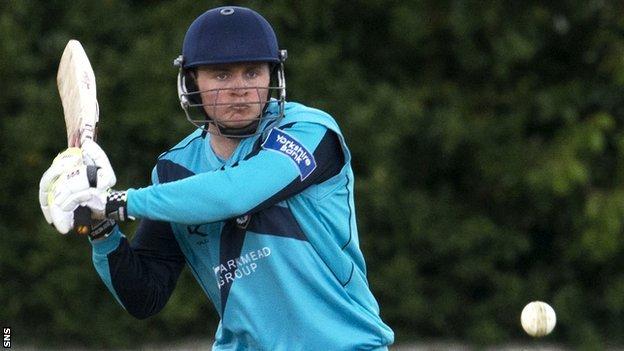 An unbeaten century by Vikram Solanki proved key to Surrey's 14-run victory over Scotland in Edinburgh.

Solanki scored an impressive 109 from 113 balls to help the visitors to a total of 237.

Calum MacLeod's half-century gave Scotland a fighting chance after a slow start to their innings.

But, despite an unbeaten 36 from Majid Haq, the Scots ran out of balls to reach the target and slumped to a second defeat in 24 hours.

The Scots got off to a good start in the field as MacLeod caught Jason Roy for 11 in the second over, but fellow opener Steven Davies formed a solid partnership with Solanki.

Davies managed 54 before being caught by Dewald Nel off Michael Leask.

The Scottish innings started poorly with only two runs recorded in the first two overs before Matthew Cross was bowled out for nine by Jonathan Lewis.

Freddie Coleman managed 32 before De Bruyn caught him off a Chris Tremlett delivery, who also accounted for Ewan Chalmers.

The wicket of Preston Mommsen was taken for only four runs as the Scots faltered at 82 for four.

However, MacLeod and Haq drove the hosts on to reach 150 in the 33rd over.

An injured Haq was replaced by Goudie, who hit 15 before being caught.

Haq returned to the crease, but a target of 20 in the final over proved a bridge too far.