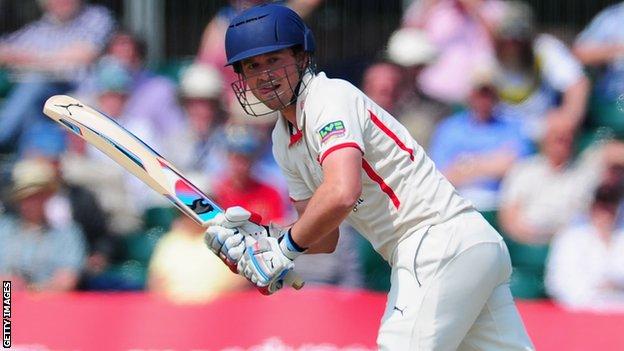 Gareth Cross and Steven Croft helped themselves to centuries for Lancashire as the game against Hampshire at Southampton petered out to a draw.

The game ended as a contest when Glen Chapple decided not to declare and set the home side a run-chase target.

After Karl Brown had been caught behind off Sean Ervine for 58, Cross and Croft batted well in a stand of 161.

The two 28-year-old's collected three sixes and 23 fours between them, but much of the bowling was distinctly friendly, with Michael Carberry running through a few impressions in the final session.

Earlier in the day, first-innings centurion Andrea Agathangelou fell for 49 when he square cut a low catch to George Bailey at point off Ervine, who added the wicket of Brown for figures of 2-17.

The only other wicket to fall was Cross, who hit James Vince straight to Chris Wood at deep square leg to end his 173-ball innings.

"Looking at the Division Two table, one perhaps can forgive Lancashire for adopting the negative approach on the last day to make sure Hampshire had no chance to even consider a run chase.

"Perhaps it shows that Lancashire consider Hampshire a threat and genuine candidates for promotion, like themselves.

"However, it does not take away from the fact that the final two sessions were tedious to watch.

"Michael Carberry's bowling impressions of Alex Tudor, Martin Saggers and one or two others were the only highlights at the end."