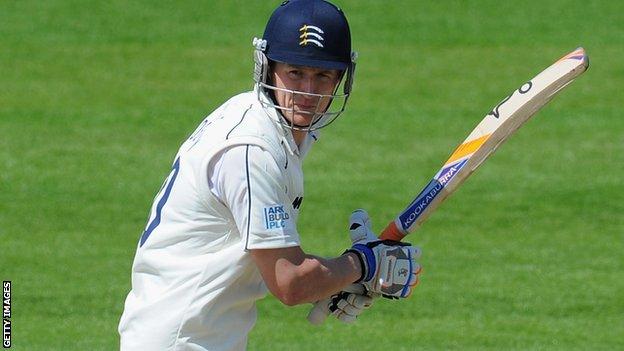 Middlesex's Joe Denly hit 73 not out to frustrate Durham and secure a draw.

Scott Borthwick had earlier scored 82 not out in Durham's 240-6 to help set the visitors an improbable 304 to win.

Callum Thorp then removed Sam Robson early but the game looked to be petering out before two wickets apiece for Mark Wood and Graham Onions saw Middlesex collapse from 96-1 to 129-5.

Denly was unruffled, monopolising the strike to see his team to 165-6 when the teams shook hands.

Resuming on 89-1, Durham soon lost Keaton Jennings after he edged Gareth Berg to slip, leaving partner Borthwick to provide the anchor to his side's innings.

Toby Roland-Jones had Will Smith back in the pavilion with the score on 147 and Ben Stokes quickly joined him after being trapped lbw by the same bowler.

Durham skipper Paul Collingwood had not added many when he edged James Harris to Robson before Phil Mustard paid the price for trying to hit out against Berg, spooning the ball high to Corey Collymore.

Gareth Breese then provided a notable cameo with a run-a-ball 20 that included a six and two fours to set up Durham's declaration.

With Middlesex having 51 overs to bat, they were 12-1 when Robson edged Thorp behind leaving Chris Rogers (54) and Denly to steady the ship, but once Aussie Rogers was struck plum in front by Wood, Middlesex were soon in deep trouble.

Wood clean bowled Dawid Malan for 5, and Onions quickly sent Neil Dexter and John Simpson back with him, Dexter edging behind and Simpson to slip.

Denly found a willing partner in Berg who blocked well for an hour to frustrate the Durham attack until Jennings took a smart low catch off the bowling of Wood and Middlesex saw out the remaining four overs to reach 165-6 at the close.

"It was a tough test up here for our boys. From the first morning really, we lost the momentum and they gained the initiative and we were always playing catch up in the match.

"But I was really proud of the way the guys fought back to restrict them in the first innings and then recover from 35-5.

"We then controlled the run rate in their second innings. There's a lot of fight and character in this side and good spirit and you can't play well all the time.

"We've been on the road for all of May, at Edgbaston and Taunton as well, and come away with two draws and a win so I'm pretty happy with that."