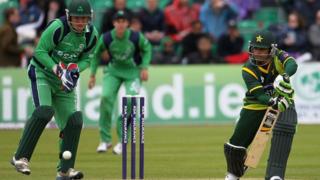 Ireland and Pakistan in dramatic tie

Ireland fell one run short of a first ever win against a Test-playing nation in the Republic when they tied with Pakistan in Dublin on Thursday.

Pakistan had appeared in full control when Mohammad Hafeez's fifth ODI century helped them to 266-5 - a total bumped up to 275 on the Duckworth-Lewis method after three overs were lost to rain.

But a Paul Stirling century put Ireland in contention and the tie was secured when Kevin O'Brien swept the final ball from Saeed Ajmal to the boundary.