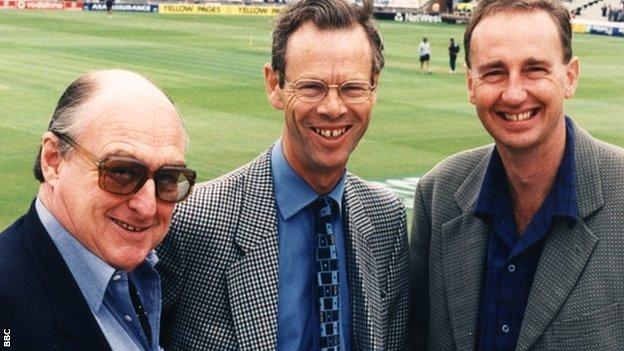 There's always been a great connection for me between my childhood and listening to cricket on the radio.

My dad was a farmer and an avid listener to Test Match Special. He'd take his radio with him through the barns as he was getting the harvest in and I'd hear laughter as he went, so I've always associated cricket with fun and nice banter.

Dad was unquestionably a Brian Johnston man, so it was a great honour for me to start my broadcasting career alongside Johnners in 1991. And what an education. I picked up so much from summarising alongside him: about timing; when to try to be humorous; when to be serious; when to bring in other people; how to communicate.

Listen to the programme again on the 5 live website

I really connected with Brian and that time was invaluable for me, both in terms of the nuts and bolts of how the programme worked and also in developing my broadcasting style.

It also featured the famous legover commentary, the culmination of an amazing summer. I think my commentary style is actually quite similar to Brian's, and my sense of humour certainly is.

The art of being a good commentator is to make it sound easy and relaxed. That's the way it has to be. You cannot sound flustered or tense or not know where you're going.

To be a good commentator, the listener has to trust you implicitly. If you don't sound in control then people aren't going to believe what you're saying. And that's the biggest hurdle for any new commentator to overcome, to earn that trust, because you don't get it straight away.

Cricket commentary involves little bursts of action followed by lots of downtime, so you're always looking for other things to talk about. You need to be able to convey colour and have powers of description.

I'm often asked to give advice on commentating, which is actually very difficult, because it's a skill that's natural and ultimately you've either got it or you haven't.

When I played county cricket, from the ages of about 18 to 30, I didn't really get the chance to listen to the game on the radio, so I can't recall listening live to John Arlott.

I made sure I got tapes of his commentary when I finished playing though, and would listen to them in the car. John was absolutely brilliant. Pace is so important in cricket commentary and he was the absolute master at controlling it.

I liken the commentator to a soloist, with the crowd as the background orchestra. The crowd has a tone and pitch and you can set your voice against it to make it sound melodic, gentle, harmonious. John Arlott clearly did that. You could hear that crowd noise in the background because of the pauses he left. Then he'd come in again with that lovely voice over the top and it was brilliant.

I was astonished by the lengths of silence that John left. Sometimes he wouldn't talk for the length of time the bowler walked back to his run up, which just wouldn't happen now, as people probably expect a little more conversation than that these days. Yet it worked brilliantly.

I've been fortunate to work with some great commentators over the years and the late Christopher Martin-Jenkins was one of the best. His great skill was his meticulous description of what he could see, adding phrases and colour to situations. He always had a sense of historical context, because he was such a scholar of the game. Detail was his great strength.

If you were listening in a car hundreds of miles away, you would still be left with a sense of every single aspect of what Christopher was seeing. He was great fun, hopelessly disorganised in a crazy way, and just loved talking cricket. If it was acceptable for a cricket correspondent to collect players' autographs, you'd suspect he'd be doing just that, because he was such a huge fan of the game.

His death was desperately sad. The whole cricket media are a pretty close bunch, so to lose an individual of Christopher's status and personality left a big hole.

My current colleague Henry Blofeld, or Blowers as everyone knows him, has this great skill of being able to look at what's going on around the ground and evoke it brilliantly. He has these great powers of description and a larger than life personality. Blowers also did television commentary, but is a much better radio man.

For TV, the discipline is completely different. You have to be terribly circumspect about what you say, because you can only talk about what's on the screen and can't be obvious.

That often doesn't leave you with much to say. Yet if you say too much, you can easily start sounding quite inane, so it's a fine balance.

Richie Benaud, who appears on our 5 live programme on Thursday, is obviously a colossus of television commentating. His precise selection of words to fit a picture was brilliant - he was one of a kind. It's very hard to choose words to actually add to a picture and Richie was a master at it.

The relationship and rapport between commentator and summariser is key to radio commentary. I started off as a summariser, which was a very good decision by our former producer, Peter Baxter. It enabled me to get a feel for the programme as well as the people on it.

I've said before that Vic Marks is my very favourite summariser. Victor and I have known each other a very long time, but you still need a relationship on air and he and I certainly have that. He's brilliant at just quietly bringing me down to earth and has a lovely sense of humour and an exceptional turn of phrase.

I must say that when I feel the chair move back beside me in the commentary booth and look around and see it's Victor, I really look forward to the next 20 minutes.

It's easy for a summariser to come waltzing in fresh from the game, when he knows everybody and knows nice stories about all the modern players. That might be nice to hear, but the challenge is doing it 20 years on, when you don't know the players intimately and your strength needs to be the insight you can bring. That's where Vic is so brilliant.

So too is Geoffrey Boycott. We're the most unlikely of bedfellows but have a great respect for one another and just click. In fact I don't think we've ever had a crossed word.

I also worked alongside Fred Trueman for about 16 years and he was a wonderful character, again quite acerbic and critical, a bit of a 'Geoffrey', but always with a great sense of humour. He was a wonderful storyteller, probably the best I've worked with. He'd light up his pipe in this cramped commentary box - which was pretty disgusting quite frankly - and would just tell these amazing stories of old tours, when he went on the boat and so on. He was wonderful at passing the time of day and I loved working with him.

The people who work on TMS love the game and respect it and want to protect it. For a cricketer, it's easy to be in your own little world and take your eye off the big picture.

What we can do is hopefully have a detached perspective, without being pompous and haughty. Cricket is a game in which you respect your opponent and play hard but fair. That's what's always held it together.

And hopefully we can be entertaining and humorous and make people laugh as well, just as Brian Johnston was able to do so wonderfully all those years ago.

Listen to our TMS Ashes archive

Listen again to 'Voices of Summer' on BBC Radio 5 live.