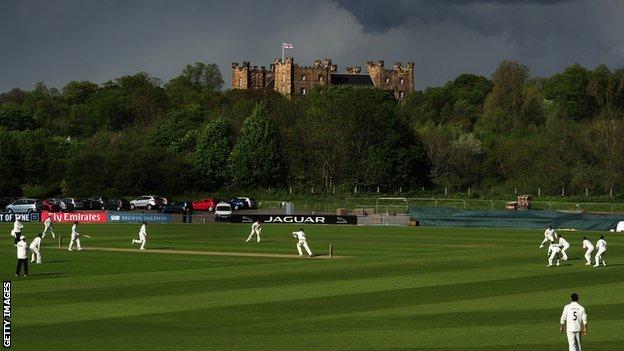 Play between Durham and Middlesex was limited to just 18 overs on a badly rain-interrupted third day.

The game did not resume until after tea when, with Durham on 37-0, Middlesex bowled four overs before more rain.

Mark Stoneman was the only casualty, in somewhat bizarre circumstances just a ball after reaching 50, his 20th first-class half-century, when he was given out leg before by umpire George Sharp.

Middlesex paceman James Harris pulled out of his appeal before it had really begun.

But, when Stoneman ran to the bowler's end, he discovered that he had been given out.

"I did not get any bat out on it, and thought that it was going down the leg side.

"If we can get enough on the board in enough time, then hopefully we can still force a positive result."

"Despite the loss of the vast majority of the third day, an exciting finish may still be provided, with all results possible.

"Time is now against Durham as they will have to push on with the bat if they are to find enough runs to defend before attempting to bowl out Middlesex.

"The lead stands at 152 and the hosts are likely to want to double that before considering a declaration. The visitors will equally want to keep the run rate down in the morning session in the hope that they may be offered a chance of victory in the final innings.

"Although a little slow, the pitch holds no demons but Middlesex must banish the memory of last year's collapse to 102 all out here, as they failed to chase down 118 to win."