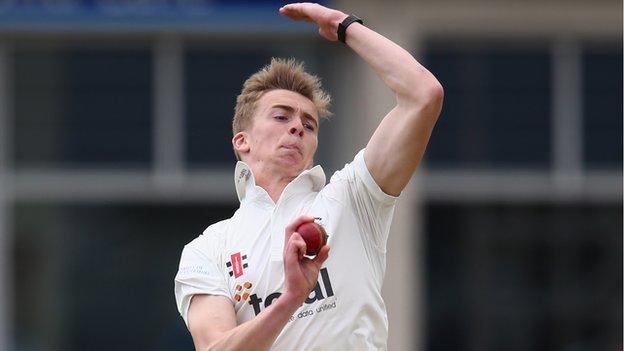 Gloucestershire will go into the final day at Worcester fearing an innings defeat despite a career-best effort from young pace bowler Craig Miles.

Resuming on 302-3, the home side lost four quick wickets, including overnight centurion Moeen Ali (123), before a 98-run eighth-wicket stand between Gareth Andrew (66) and Jack Shantry (31).

But it was Andrew who got the prize wicket of former Worcestershire opener Michael Klinger, the Gloucestershire skipper, for 26.

And, after Chris Russell had removed Hamish Marshall with his first ball of the day, Richardson returned after another break to remove Alex Gidman for 32.

When bad light ended play for a final time, that left the visitors still needing another 136 to make Worcestershire bat again.

"Having dominated much of the game, Worcestershire will look to press home the advantage and, if Gloucestershire were to escape, it would be a massive achievement.

"Worcestershire's morning collapse was halted by Gareth Andrew, once again proving what a good number eight he is, and Jack Shantry, who looked the angriest man in Britain after being run out when Chris Russell failed to answer his call.

"Craig Miles earned his figures for a fine early spell, but Richardson then set about the Gloucestershire batting and, on this occasion, got some support.

"Some of the Worcestershire faithful think Richardson should also play one-day cricket. Others, like myself, think he should be wrapped in cotton wool and wheeled out for proper cricket only."

"Another disappointing day for Gloucestershire.

"They began promisingly, taking four early wickets, and at one stage Craig Miles had taken three wickets in nine balls without conceding a run.

"His career-best six-wicket haul was the high spot; the other bowlers couldn't keep up the pressure and the batsmen, with the exception of Alex Gidman seemed to lack the discipline needed to whittle away at a large deficit."