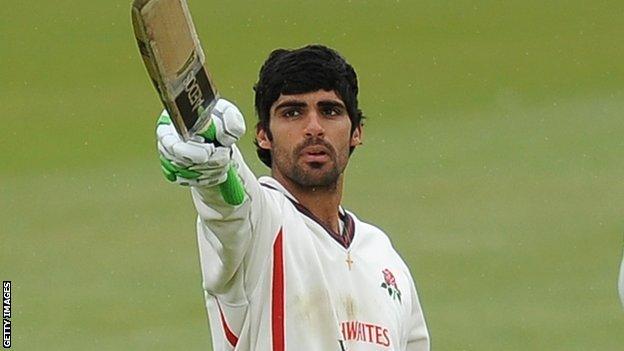 Hampshire's Division Two match with Lancashire was heavily interrupted by rain, with only 25 overs possible on the second day at Southampton.

Andrea Agathangelou (121) claimed a maiden Championship century as the visitors added 43 to their overnight total before being bowled out for 295.

The 23-year-old had replaced Simon Katich, who was taken to hospital after being struck on the head in the nets.

Hampshire reached 7-1 in reply, 288 behind, before play was abandoned.

"A special day for Lancashire's Andrea Agathangelou, who scored his maiden century for the Red Rose.

"The 23-year-old South African-born batting all-rounder only came into the side at the 11th hour due to a freak injury to Simon Katich.

"Katich was hit on the temple with a ball during net practice on day one and was taken to hospital but later given the all-clear and discharged.

"That opened the way for Agathangelou, who has been on the books at Old Trafford since 2010, and he's certainly taken his chance."