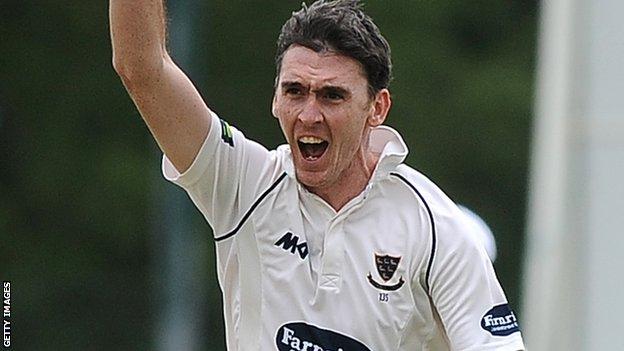 Sussex romped to victory inside two days over Somerset at Horsham, as the visitors suffered their second batting collapse of the match.

The result leaves Sussex top of Division One, while Somerset are now without a win in any of their five County Championship matches this summer.

Although Thomas had Magoffin caught by Steve Kirby with the sixth ball of the day, with the visitors 224 in arrears the significant damage had already been done.

Marcus Trescothick (13) and Arul Suppiah (22) looked to be getting Somerset off to a more solid start in their second innings, but Trescothick, Alviro Petersen and James Hildreth all fell for just five runs to leave them in deep trouble again.

Suppiah's 45-ball resistance was then ended by James Anyon (3-25), with Monty Panesar taking the catch, and once the England spinner had dismissed Jos Buttler for 29 and Chris Jordan (2-36) had seen off the in-form Peter Trego, the result looked a formality.

Magoffin took each of the final three wickets, with Ben Brown catching last man Jamie Overton for a duck to confirm victory with the match little more than four sessions old.

"As convincing a victory as the score suggests.

"The baffling decision by Somerset to bat first having won the toss backfired spectacularly, although take nothing away from Steve Magoffin, whose 12-31 in the match was a masterclass of seam bowling.

"With Luke Wright raring to go having returned from the IPL, and Amjad Khan almost fit to return, Sussex look to have strength in depth, and must now be considered serious title contenders.

"By contrast, Somerset looked short of fighting spirit and confidence, and those qualities will need to addressed quickly if they are to avoid a relegation battle."