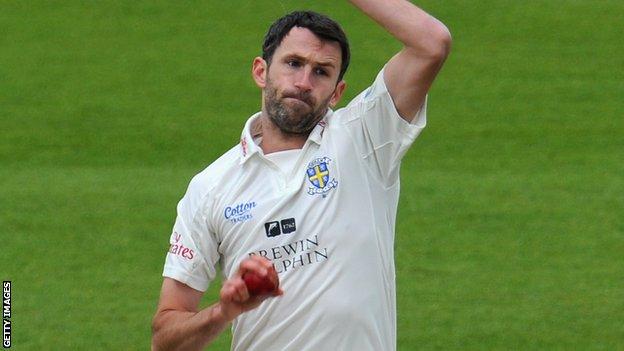 Seamer Graham Onions took 5-42 to help Durham to a 63-run first-innings lead after bowling Middlesex out for 196.

From 35-5, Neil Dexter and John Simpson then added 68 together before Onions dismissed Simpson and Gareth Berg.

Dexter fell for 52 before the tail, led by James Harris (37), nudged Middlesex towards 200 but they fell four runs short and Durham were 37-0 at stumps.

In a precarious position overnight, the visitors were in further disarray when England paceman Onions picked up where he left-off on day one and tore into the top order, tempting Denly into a prod which was gratefully gathered by Scott Borthwick at second slip and new batsman Malan was not far behind when he was out lbw for a duck.

When Stokes trapped Tom Smith plum in front, Middlesex will have had the 110 total required to avoid the follow-on in mind but Dexter and Simpson's contrasting partnership all but ended that possibility as Simpson hit 42 from only 63 balls whilst his counterpart dug in at the other end.

Onions was then reintroduced and he sent Simpson back to pavillion and he was soon joined by Berg when he edged to Paul Collingwood who juggled the ball at slip but eventually kept hold to make it 119-7.

After the stoical Dexter had battled his way to a half century and nicked Ben Stokes behind two runs later, a spirited effort from Harris and Toby Roland-Jones almost secured a batting bonus point but they fell to Borthwick and Mark Wood respectively before Durham's openers were untroubled on their way to the close.