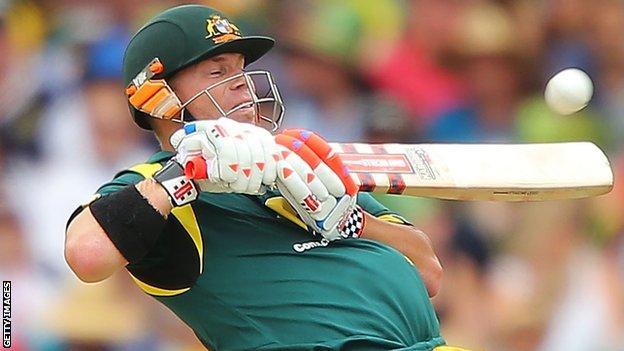 Australia's Test opening batsman David Warner has been fined £3,700 for posting abusive comments to journalists on his Twitter account.

Warner, 26, has apologised after being found guilty of breaching Cricket Australia's code of behaviour.

He said: "In hindsight, clearly I let my frustrations get the better of me and posted some inappropriate tweets.

"I could have chosen my words better and I apologise for any offence that my language may have caused."

The posts, some containing obscene language, appeared after News Limited's Robert Craddock criticised the Indian Premier League (IPL) in an article which used a picture of Warner.

Warner, who is currently appearing in the IPL for Delhi Daredevils, pleaded guilty at a hearing on Wednesday of breaching the rule governing unbecoming behaviour.

Warner has made 19 Test appearances, averaging 39.46 with the bat. He has made three centuries and seven fifties.

Rule 6 states: "Players and officials must not at any time engage in behaviour unbecoming to a representative player or official that could (a) bring them or the game of cricket into disrepute or (b) be harmful to the interests of cricket. This rule applies at all times where the unbecoming behaviour involves the player being involved in public comment or comment to or in the media."

Warner added: "I'll continue to have honest conversations with all my followers and I will be mindful of the language I use in future."

"Warner, who pleaded guilty, received a $5,750 fine, the maximum financial penalty for a first offence under Rule 6 of CA's Code of Behaviour."

The other reporter mentioned in the tweets, Malcolm Conn, said on Monday he had no hard feelings.

The journalist added: "'I'm surprised this episode has become so big. In almost 30 years of covering international cricket I have had a significant number of pointed, and sometimes heated, discussions with players.

"This latest episode should remind competitors in all elite sports of the public standards expected when they hit the button and 140 characters explode around the globe.

"Say your piece as strongly as you like but consider there are many out there who do not appreciate bad language, particularly parents of children who idolise sports stars."

Warner was recently named in Australia's squad for the Ashes Test series, which begins at Trent Bridge on 10 July.

Averaging 39.46 with the bat, he has scored three centuries in 19 Tests.