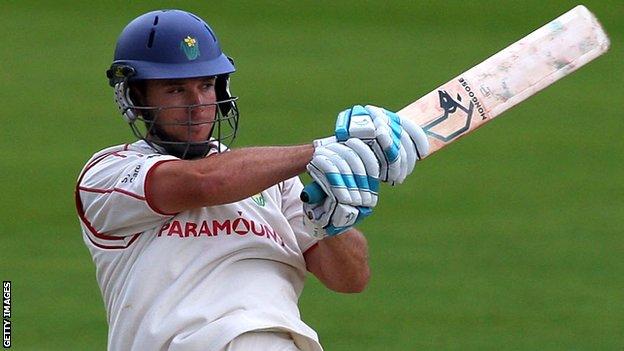 Hogan (4-25) dismissed three of the top four while Glover also chipped in with 4-51 as the hosts struggled in reply.

Last man Nathan Buck fell to the final ball of the day, leaving Leicestershire 142 all out, trailing by 300 runs.

Allenby's unbeaten 138, against his former club, was his joint-career-best.

"This was Glamorgan's best day of the season - Jim Allenby, a previous Leicestershire player, came back to haunt his old county by scoring a career best 138 not out.

"This enabled Glamorgan to reach 442 for nine and for the first time this season claimed four batting points.

"Any hopes Leicestershire had of avoiding the follow-on were quickly dashed as Glamorgan's seam bowlers took full advantage of a greenish pitch.

"John Glover and Michael Hogan shared eight wickets and with Leicestershire trailing by 300 runs the match could easily end on Thursday, weather permitting."