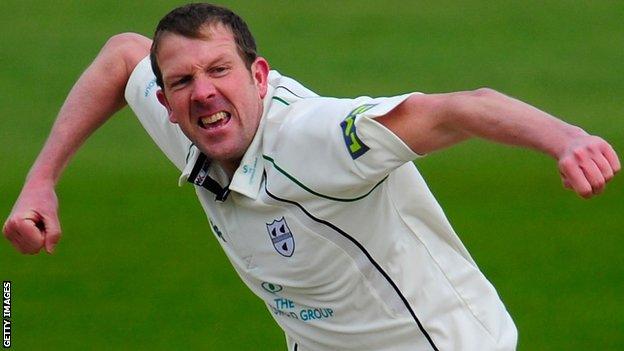 Alan Richardson took a career-best 8-37 to hand Worcestershire the advantage over Gloucestershire at New Road.

The 38-year-old dismissed each of the visitors' top-four batsmen, before Hamish Marshall (45) and Benny Howell (36) shared 74 for the fifth wicket.

In the last six days, Alan Richardson has taken 20 wickets in less than 54 overs in three innings.

His new career-best 8-37 surpasses his 8-46 for Warwickshire against Sussex at Edgbaston in 2002.

Richardson, who also recorded career-best match figures of 12-63 in last week's win over Kent, polished off the tail to bowl out the visitors for 234.

Worcestershire closed the opening day on 65-0 in reply, 169 behind.

Daryl Mitchell (46) and Matt Pardoe (17) survived the final 23 overs of play, leaving the hosts in a strong position heading into day two.

"How good would Alan Richardson have been if he'd stayed fit and worked out his game earlier in his career?

"He has now taken 20 wickets in the last two games, as he continued to bowl a splendid line and length against Gloucestershire.

"The wickets at Canterbury and New Road may have suited the medium-pacers, but the rest of his colleagues did not follow suit. If they had, Gloucestershire may not have passed 200.

"If ever a young bowler needed an example to follow it must be the veteran who is now 38, but approaches his cricket with the enthusiasm of a 20-year-old.

"Gloucestershire recovered from a poor start, but it remains to be seen if 234 is a decent total."

"Gloucestershire will be disappointed on two fronts. At 173 for 4 they looked on course for a decent score having been put in, and then their bowling was too loose at the end to really trouble Mitchell.

"Richardson gave a lesson in how to take wickets by bowling straight in an untroubled fashion.

"Gloucestershire need to bowl in a similar way and take wickets early on the second day to stop the game going beyond their reach."