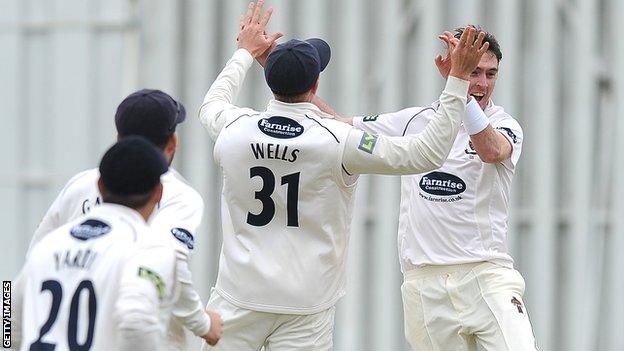 Magoffin took 8-20 in Somerset's 76 all out, with Jos Buttler (22) one of only three players to reach double figures

Somerset, who are yet to taste victory in their five Championship matches this season, decided to bat on day one after captain Marcus Trescothick won the toss.

Magoffin took the first three wickets to fall, before Chris Jordan (2-32) got in on the act to dismiss Alex Barrow for a fifth-ball duck.

Trescothick was fifth out for 20, while Peter Trego and Thomas (golden duck) followed in quick succession as Magoffin claimed three wickets in four balls.

Sussex's opening pair of Nash and Wells put on more than Somerset combined, scoring at four-and-a-half an hour, before four wickets fell for the addition of only 33 runs.

Joe Gatting hit his first delivery for four but was caught behind by Trescothick off Thomas from the very next ball.

Somerset hit back late in the day with Hamilton-Brown, Jordan and Ben Brown falling in successive overs as Sussex slipped from 232-5 to 241-8. But Magoffin (21 not out) and Monty Panesar (17 not out) saw Sussex successfully through to stumps.

Despite 19 wickets falling during the day, ECB pitch inspector David Capel said he was perfectly happy with the surface.

"This was an extraordinary opening day at Horsham with 19 wickets falling and 374 runs scored.

"Somerset surprisingly decided to bat and they regretted that decision for the rest of the day as Steve Magoffin exploited the conditions to the full, his immaculate line and length were a masterclass of seam bowling.

"In reply, Sussex proved the pitch was a good one, with Rory Hamilton-Brown, in particular, looking in excellent form.

"Somerset did not help their cause with some ragged out-fielding, particularly in the final session, and Sussex will scent a third Championship win of the summer providing the weather holds."