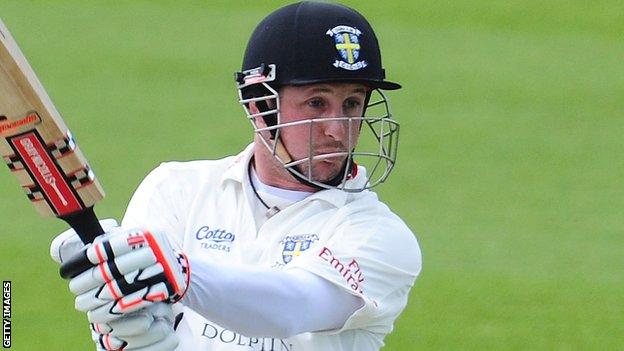 Phil Mustard scored a half-century as Durham were dismissed for 259 on day one at Chester-le-Street.

After Mark Stoneman fell cheaply to Corey Collymore (4-61), Scott Borthwick (52) and Keaton Jennings (38) put on 101 for the second wicket.

Mustard's resolute 62 pushed Durham to a second batting point, before Middlesex closed 248 behind on 11-2.

The country's leading runscorer Sam Robson lost his off-stump to Graham Onions in the first over, while Callum Thorp trapped Chris Rogers lbw for three.

Earlier, Collymore struck in the third over of the day to get rid of Stoneman for five, but Borthwick and Jennings pushed Durham past the 100 mark.

Middlesex dropped three catches with Durham skipper Paul Collingwood surviving an edge off the first ball he faced only to miscue the second to mid-wicket, while Jennings and Ben Stokes were put down at slip.

Will Smith chipped in with 37 as Durham appeared to be in a strong position on 204-5.

But Middlesex hit back again late in the day, including taking the last four wickets for 29 runs, with Collymore getting rid of Thorp and Mark Wood in successive deliveries with the second new ball.

"Durham's score was about 20 short of a first-innings par on this ground. The problem was they kept losing their wickets in clusters.

"But Phil Mustard's 62 late on steered them to a second batting point and gave them something to play with.

"Middlesex had eight nervy overs to bat out. Removing Sam Robson - the most dangerous batsman in the country right now - for a fourth-ball duck was a fantastic start.

"Seeing off Chris Rogers inside the first two overs was fantastic too. It will be a very interesting second morning."

"It was Middlesex's day for the most part, but to claim Sam Robson and Chris Rogers before the close, was a huge blow to strike for Durham.

"There is movement in the track for the seamers, but its a slow pitch and batsman that can get a start should be able to cash in.

"The hosts were given a life when Keaton Jennings was dropped by Robson - a comfortable chance at second slip off Toby Roland-Jones, which would have left them two down with 40 minutes still to go until lunch.

"However, they failed to capitalise and collapsed to 149-5 not long into the afternoon.

"The visitors preserved with a consistent line and length, but found the ball quite soft and unhelpful after somewhere around the 55-over mark as the hosts scrambled towards a par score.

"Both Durham opening bowlers found similar assistance with the new ball as Middlesex had earlier in the day, and will fancy a strong hour at the start of the second day to put them in a commanding position."