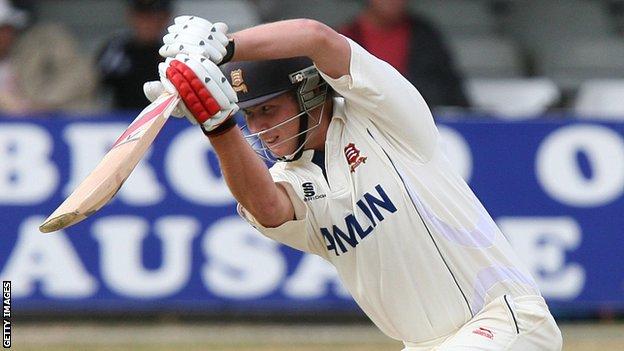 Tom Westley and Jaik Mickleburgh's opening stand of 143 helped Essex chase down a target of 275 with just seven balls to spare against Glamorgan.

Earlier, an excellent 101 by Glamorgan captain Mark Wallace and 55 from Graham Wagg helped the Welsh county to 388.

But in a sun-bathed Swalec stadium, Essex edged to their second win of the season by five wickets.

Glamorgan had resumed on 303-6 and, after Wagg and Dean Cosker were caught behind, Wallace went on to score the county's first Championship century of the season.

He was evntually bowled playing forward to Ravi Bopara and when Tim Phillips dismissed Michael Hogan, Essex were left with 70 overs to reach their target.

After Westley and Mickleburgh had departed, first-innings centurion Bopara made 33 but then went for a big hit off Dean Cosker, only to be caught at long on.

Essex then sent in the big-hitting Graham Napier as they required 58 from the final 10 overs, but he departed for 10, caug htafter trying to hit Cosker out of the ground.

That left Essex still needing 45 from 7.5 overs and after skipper James Foster holed out with just seven runs required, Pettini and Smith saw them home, moving them up to second in the Division Two table, with Glamorgan third from bottom.

"This victory for Essex, which lifts them to second, was built on a superb opening partnership of 143 between Jaik Mickleburgh and Tom Westley.

"The duo enjoyed success as an opening pair in the second half of last season and will do so again in the future but Mickleburgh's place in the side will soon be threatened by the arrival of Hamish Rutherford.

"Westley is in great form and now has the consistency that previously eluded him.

"This was a terrific advert for county cricket and a big win for Essex will leave them confident of beating Kent and Worcestershire in the next fortnight to launch their promotion bid."