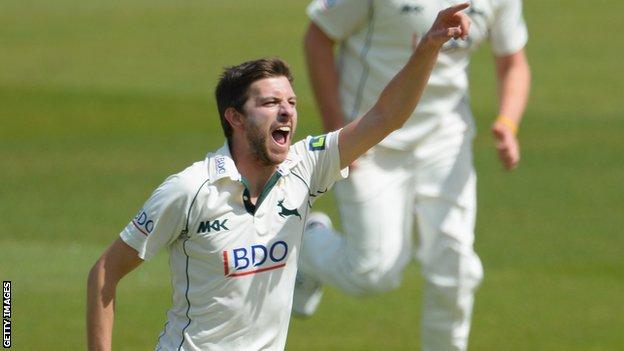 Harry Gurney and Paul Franks took three wickets each as Nottinghamshire beat Surrey in a Championship match at Trent Bridge for the first time since 1992.

The visitors, chasing a target of 259 to win, subsided meekly for 144 in seamer-friendly conditions.

Steven Davies (28) was the only other batsman to reach double figures before playing on to left-armer Gurney (3-40).

The cloud cover overhead suggested Surrey would not find batting easy on the final morning, having resumed on 72-3, and so it proved as Franks and Gurney found both swing through the air and movement off the pitch.

Burns was first to go, caught behind as he attempted a flashing drive shortly after bringing up his half-century and De Bruyn was then undone by a superb delivery that left him off the pitch and took the edge.

Gurney enjoyed his first success when Gary Wilson spooned a return catch to him and Surrey were 122-7 when bad light intervened, but it was only a temporary reprieve.

Davies dragged the ball into his stumps as he tried to force it away off the back foot and the end came in the early afternoon when Stuart Meaker drove spinner Samit Patel to extra cover.

The defeat left Surrey second from bottom of the Division One table, with no wins from their opening five matches.

"A low-scoring game is usually a good game and despite the margin of victory, this was a tense affair throughout, eventually decided by the Notts attack.

"With two wins out of four things suddenly look much brighter for the Robin Hood county."

"This will be a painful defeat for Surrey.

"Their bowlers got them back into the game, but the batsmen could not establish themselves on the final morning and give themselves a chance of securing the win.

"Ultimately, Nottinghamshire were the better side in the key moments of this game and Surrey will have to reflect on back-to-back defeats in the Championship."