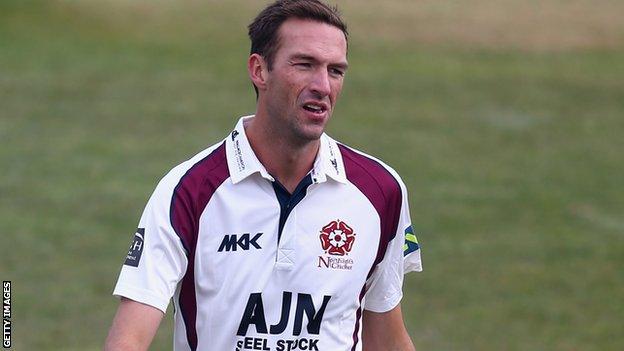 Australian Trent Copeland produced a superb spell of bowling as Northants tried to make up for lost time on day three against Leicestershire.

Opener Greg Smith made 51, but it took an unbeaten 64 from Shiv Thakor to stave off the threat of following on.

Bad light forced an interruption after Matthew Spriegel had fallen cheaply, lbw to Ollie Freckingham, who removed Middlesbrook and Rob Newton in the same over after the restart to finish with 3-28.

Alex Wyatt also picked up a couple of wickets to leave all three results theoretically possible on the final day, but Leicestershire will need to run through the rest of the Northants order quickly to give themselves time for a successful run chase.

The odds remain in favour of the home side, who are seeking a fourth victory of the summer, and they will again look to the relentlessly accurate Copeland, whose seven wickets, including Smith and Leicestershire skipper Ramnaresh Sarwan, took his seasonal tally to 22.

"Northants are in control of this game, but a little wobble when they lost four wickets in the search for quick runs may concentrate minds on the final day.

"Having taken nine Leicestershire wickets in the space of three hours on day three, they will fancy their chances if they can quickly add to their 215 lead.

"It may not be just at Wembley, where Northampton Town are playing Bradford in the League Two play-off final, on which Northamptonshire minds are focused."