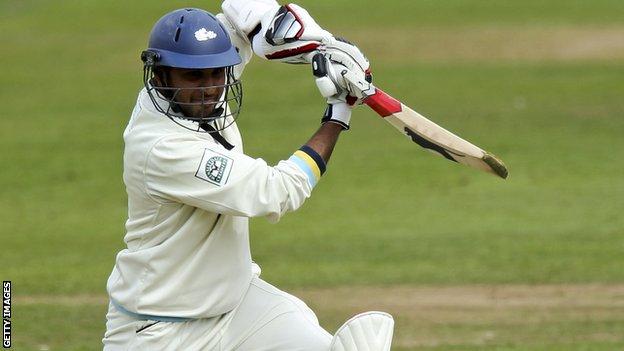 Fresh from his unbeaten first innings 68, when he was one of only four batsmen to make double figures, skipper Jim Troughton was again the Bears' top scorer with 37.

After hitting a career-best 180 in last week's County Championship draw against Somerset - his first hundred in nearly four years, since back-to-back centuries against Hampshire and Lancashire in August 2009, Adil Rashid has responded well to being promoted to number six in the batting order. But he did have one big slice of luck when, without adding to his overnight 68, he was bowled by a no-ball from Chris Wright.

Batting for 20 minutes over five hours in the match, he set an example, which, sadly for him and Warwickshire, was not followed by others.

It was the first Championship defeat Warwickshire have suffered since Dougie Brown succeeded Ashley Giles as director of cricket over the winter, their heaviest in three years - and the Bears' first four-day reverse at Edgbaston in 14 matches since August 2011.

Yorkshire's victory inside three days - their third win in five games since returning to the top flight - took them briefly top of Division One for a couple of hours until Middlesex completed their own win over Somerset at Taunton.

After off-spinner Jeetan Patel (5-56) had picked up the last two Yorkshire wickets, any hopes the Bears had of batting for a day and a half to save the game disappeared inside just seven deliveries as Varun Chopra and William Porterfield both went leg before first ball.

Darren Maddy, making his first start of the season, quickly followed to leave the home side 9-3.

Sidebottom (3-23) and Bresnan (3-41) then continued to swing the new ball under cloud cover in Birmingham before Patterson quelled brief resistance in a spell of 3-19.

"They are obviously a very good side, so to come away with a victory like that is very pleasing.

"Over the three days our skills were top notch and our bowling was sensational.

"And the way our batsman handled some very good bowling was really good. Rashid got his hundred beautifully but we had three partnerships of 70 or above. That's really important when you're trying to post a big total."