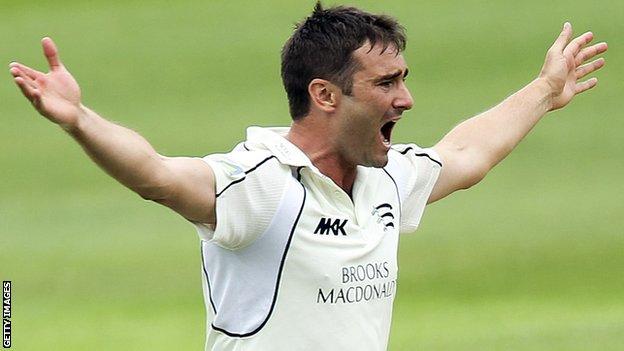 Middlesex moved to the top of the County Championship Division One table as Tim Murtagh inspired them to a nine-wicket win over Somerset at Taunton.

Seam bowler Murtagh took 6-49 for career-best match figures of 10-77 as the home side were dismissed for 265.

An innings loss had been on the cards, but Peter Trego (82) and Jos Buttler (85) spared them that embarrassment.

However, Middlesex only needed 71 to win and, following a lengthy rain delay, they wrapped up victory on 72-1.

Earlier in the day, Somerset resumed on 112-5, still needing another 83 to make Middlesex bat again, but Trego and Buttler responded to the parlous situation with some aggressive strokeplay.

Trego hit three fours in one over from Murtagh before the Ireland international sent him on his way, caught in the gully.

Buttler was later caught by Chris Rogers off Gareth Berg after hitting a six and 10 fours in a stay of almost four and a half hours.

It looked like the weather might force the players to return on the final day, with a total of 35 overs lost.

But the visitors took the extra half hour after play resumed on 11-0 and, although Rogers went for 25, Sam Robson (24) and Joe Denly finished the job.

Meanwhile, Somerset have signed South Africa all-rounder Dean Elgar to replace compatriot Alviro Petersen, when he joins up with their national side for the Champions Trophy.

The 25-year-old, who has played six Tests and five one-day internationals, will be with the county from 28 May to 24 June.

"It was nice to win inside three days. Just to win is an outstanding effort, but [especially] against a strong Somerset team. I'm obviously thrilled with the way we are playing at the moment, with two good draws in the last two games, but to get a big win like this is a big bonus for us.

"I think what Tim Murtagh [who took ten wickets in the match] does with the ball is nearly genius. I can't speak more highly of the guy. Every time he's got the ball, whether it is old or new, he's still running in doing things with it.

"I think James Harris backed him up well at the other end and everyone contributed. I'm delighted with things and hopefully it's a sign of things to come."