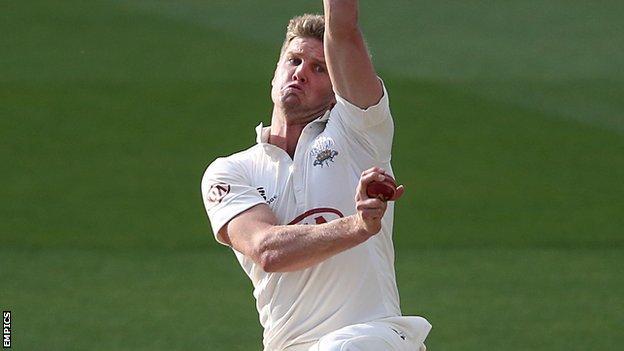 Stuart Meaker and Jade Dernbach both took three wickets to help give Surrey a platform to push for victory on the final day against Nottinghamshire.

The hosts resumed at Trent Bridge on 24-1, but wickets fell regularly as they were dismissed for 191, Samit Patel top scoring with 37.

Their target was down to 186 when bad light forced a premature close with Surrey on 73-3, Rory Burns 41 not out.

Stuart Meaker and Jade Dernbach have taken 33 wickets between them in the County Championship so far this summer. Meaker's eight-wicket haul at Trent Bridge means he now has 16 victims so far this season, while Dernbach has one more.

Luke Fletcher did the early damage, removing both Jason Roy and Arun Harinath before Vikram Solanki was brilliantly run out for a duck by Steven Mullaney's direct hit from mid-wicket as Surrey slumped to 29-3 in their run chase.

But Burns and Zander de Bruyn kept the home attack at bay until stumps to set up a potentially intriguing final day.

That Surrey will resume with a chance of victory owed much to the efforts of their bowlers after Notts had resumed with a lead of 91 with nine second innings wickets intact.

With the floodlights on throughout, prompting several delays for bad light as they took too much effect, Meaker took centre stage to finish with his second four-wicket haul of the game.

He first picked up nightwatchman Fletcher, who was twice dropped in the slips, before Dernbach enticed Ed Cowan to chop on to his own stumps.

That was the first of eight wickets to fall in the afternoon session in which Meaker removed Patel and Paul Franks, while Dernbach dismissed James Taylor and Riki Wessels with successive away-swingers.

"A thrilling conclusion to this match is now in prospect after 12 wickets fell under slate-grey skies on the third day.

"Notts would have wanted to build an unassailable lead but in losing eight wickets during the afternoon, they gave themselves enough time to make early inroads into the Surrey top-order.

"Luke Fletcher was Notts' man of the day, while Steven Mullaney's brilliant run out of Solanki worth the admission alone."

"If the weathermen have got their forecast wrong and the rain stays away a tense final day awaits at Trent Bridge. Surrey will need a further 186 for victory after their bowlers got them a chance by dismissing Notts for 191.

"Stuart Meaker with 4-60 was the pick as he bowled fast and with excellent control. But then Luke Fletcher used the conditions to remove Jason Roy and Arun Harinath to give Surrey a fright.

"And things got even harder when Vikram Solanki was run out without scoring. But Rory Burns played very well and he will start tomorrow unbeaten on 41. Let's hope for both sides the rain stays away."