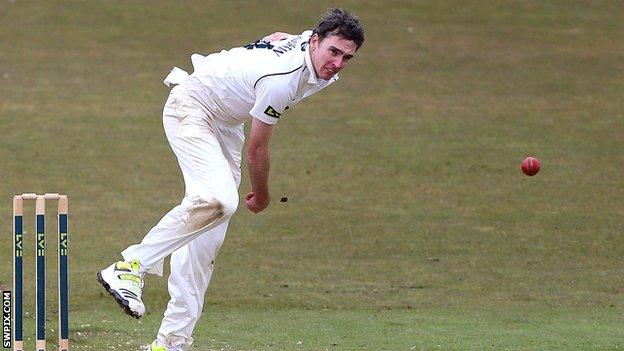 Sussex are well placed to secure victory on the final day of their Division One match against Derbyshire.

Steve Magoffin took the key scalp of Shivnarine Chanderpaul (23) late on to leave the hosts 189-7, a lead of 11.

Earlier, Michael Yardy (153) shared a final-wicket stand of 60 with skipper Ed Joyce to earn maximum batting points for Sussex, who were all out for 401.

Joyce (25no) had missed day two for family reasons, while Derbyshire's Mark Footitt ended with a career-best 6-120.

No joy at Derby

Derbyshire, promoted for the first time last summer, are bottom of Division One, having lost three of their first four Championship matches

West Indies left-hander Chanderpaul, arguably the home side's best hope of saving the game, had stayed resolutely at the crease for two and a half hours, but was unable to make it through to the close, caught at second slip by Yardy.

It capped a superb few hours for the former Sussex captain, who, passed 9,000 first-class runs before he was last out, bowled by Tim Groenewald.

Derbyshire, who began the match bottom of Division One, lost wickets at regular intervals as they tried to claw back a first-innings deficit of 178.

After opener Billy Godleman fell cheaply early on, Chesney Hughes (32), Wayne Madsen (32) and Dan Redfern (24) all made starts before being dismissed.

Following Chanderpaul's late departure, England spinner Panesar then dismissed Jon Clare to further press home the visitors' advantage and, providing the weather holds on the final day, they will be strong favourites to register a second Championship victory of 2013.