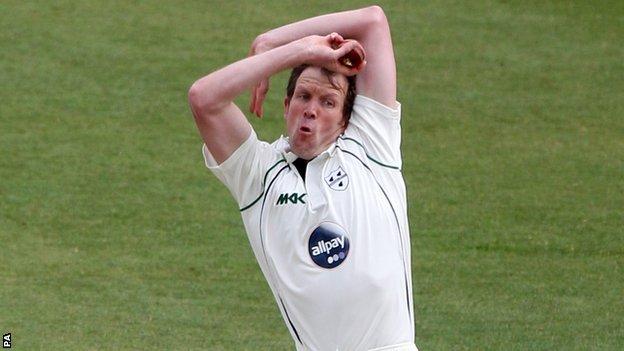 Alan Richardson roared back to his best as wickets fell regularly on the first day of Worcestershire's meeting with Kent at Canterbury.

Alan Richardson, who celebrated his 38th birthday last week, has now taken 19 five-fors in his first-class career, 10 of which have come in less than four seasons with Worcestershire. "I haven't bowled that well for a while," he told BBC Sport. "You know it's your day when you get one caught in the slips off gully's head!"

It could have been worse for Kent, who had made just 94 when opener Sam Northeast was eighth out for 52.

But the hosts took three quick wickets before Worcestershire closed on 105-4.

In the overcast and gloomy conditions that hung over Canterbury all day, Kent struggled under the floodlights for most of the morning.

Northeast's best Championship score of the season, bolstered by a late 40 down the order from number 10 Mark Davies, at least gave the home side something to bowl at.

And Davies then claimed two scalps as Worcestershire slumped to 34-3 before Moeen and Alexei Kervezee (29 not out) led a recovery.

"An interesting day played under floodlights for the most part, the paying public getting fuller value than they might otherwise have done.

"There was a sigh of relief when I got there. I felt happy, a bit like I did at the back end of last season," Sam Northeast told BBC Sport.

"They were treated to some fine cricket in truth.

"A first championship half century of the season for Kent's Sam Northeast, a real confidence booster for him."