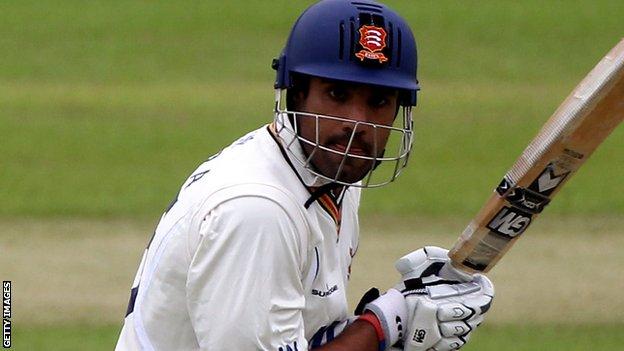 Bopara steadied Essex, and despite the efforts of Australian Hogan (5-68), the right-hander defiantly reached his ton off 204 balls.

His innings was, in the circumstances, one of his best for the county, with Graham Napier their next highest scorer on 41 not out, although Ben Foakes (38) and James Foster (27) provided good support for Bopara in stands of 83 and 91.

Near the end of the day, left-armer Wagg bowled four no-balls in an extraordinary 11-ball over that produced 21 runs, including a six from Napier.

"Essex needed Ravi Bopara to find his form and he responded with a superb 145 which has put his side in control of this match.

"Mark Pettini and Ben Foakes played important supporting roles in partnerships with Bopara that gave Essex a platform. He had some luck, especially when surviving one very close lbw shout, and wasn't fluent until he sped through the nineties with successive leg-glanced fours.

"From then on he played with freedom and renewed confidence. It was an innings that bodes well for the rest of the season and backs up the judgement of the England selectors who have kept him in their plans."