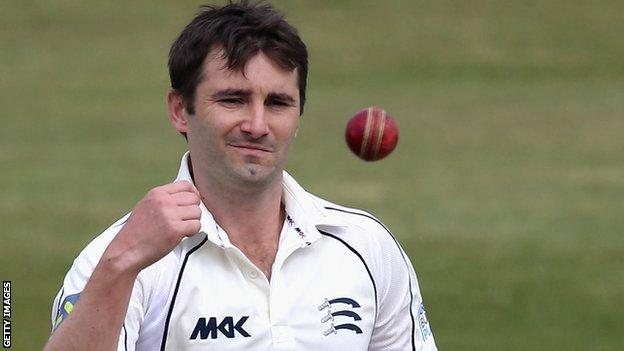 Somerset's reply started poorly with Murtagh removing four of the top five batsman as the hosts made just 152.

Having enforced the follow-on, Murtagh (4-22) once again raced through the top order, with Somerset closing on 112-5 despite 58 not out from Peter Trego.

The West country side, still without a win in the County Championship this season, are facing a resounding three-day defeat on a ground where they have not lost a first-class match since 2011.

In the morning, Dexter added just eight to his overnight score before Alfonso Thomas caught him off the bowling of Overton, and the 19-year-old completed career-best figures by bowling last-man Murtagh for 29.

Somerset reached 36-0 in reply before Murtagh (4-28) dismissed Marcus Trescothick and Alviro Petersen with successive balls and James Harris bowled Arul Suppiah on the stroke of lunch.

Wickets continued to fall at regular intervals, with only Trego offering any kind of resistance before he fell to Neil Dexter for 34.

Middlesex captain Chris Rogers enforced the follow-on and Suppiah was trapped lbw by Murtagh for a first-ball duck.

The hosts collapsed to 35-5 before Trego again offered some respite for the home side, although his 65-ball knock is likely to be in vain with Somerset still requiring another 83 runs just to make Middlesex bat again.

"Middlesex assumed full control of the match after an extraordinary second day at Taunton.

"Tim Murtagh was the pick of the bowlers with four wickets in each Somerset innings to add to his 29 runs scored in the morning session.

"The pitch was damp at the start of the match, with a very green top as well, and the sun on the second day has hardened it with some indentations which have unsettled the batsmen.

"Having reduced the hosts to 35-5, Middlesex felt the ball had become misshapen and requested a replacement. That also brought a change in intensity as there wasn't anywhere near as much movement thereafter.

"There shouldn't be anyway back for Somerset, who avoided a two-day defeat but that will only be a small consolation on a bad day."

"Somerset batted badly, Middlesex bowled well. Certainly the pitch did misbehave for a couple of the home side's wickets but Trego and Buttler showed the necessary application in the evening to at least ensure the game went into a third day.