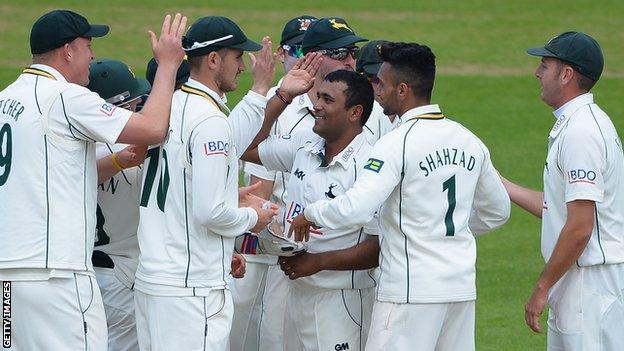 The visitors slumped to 47-5 in reply before tail-enders Gary Wilson (49) and Gareth Batty (41) fought back.

Five Notts bowlers each ended with two wickets apiece as Surrey were all out for 207 before the hosts came out again, closing on 24-1, a lead of 91.

After Gurney fell to the third ball of the day to England international Dernbach, Surrey's reply got off to a disastrous start as openers Rory Burns and Jason Roy fell for a combined total of nine to Gurney and Luke Fletcher respectively.

This poor form appeared to filter through to their teammates, with Arun Harinath - 24 from 107 balls - the only one of Surrey's top six to pass single figures, leaving the visitors on the ropes at 47-5.

Wilson and Batty led the recovery before both fell to Samit Patel, who finished with impressive figures of 2-4 from eight overs.

Wilson edged a catch to wicketkeeper Riki Wessells, before Wessells stumped Batty after he moved out of his crease only to completely mistime a shot.

Once Ajmal Shazal took the final Surrey wicket of Dernbach, there was enough time for Notts opener Alex Hales' middle stump to fall to Stuart Meaker.

"Another terrific day of Championship cricket ended with Notts having their noses in front against Surrey thanks to a disciplined performance with the ball, with five of their bowlers equally sharing the 10 wickets to fall."

"This was more like the Trent Bridge of old, with prodigious seam movement all day long and a pumped-up attack making the most of it. "

"It was a tough day for the Surrey batsmen, but the visitors still have a chance in this game. Thanks to some excellent bowling from the Nottinghamshire pacemen, Surrey found themselves 47-5 at lunch. But Gary Wilson and Gareth Batty fought really hard as Surrey eventually made 207.

"Just before the close, the home side lost Alex Hales when he was bowled by Stuart Meaker. Nottinghamshire hold the initiative, but Surrey are by no means out of the game."