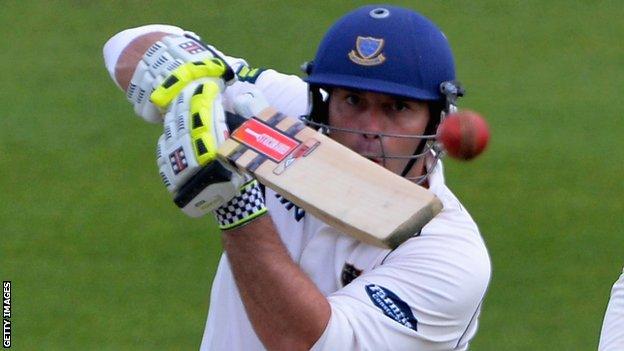 Michael Yardy hit an unbeaten century and put on 179 with Chris Jordan to carry Sussex into a first-innings lead on day two against Derbyshire.

Mark Footitt dismissed Steve Magoffin and Anyon after a short final-session rain break for figures of 5-104.

Derbyshire began the day on 158-6 and at least had the consolation of earning a batting bonus point, thanks to Clare (25) and Richard Johnson (22 not out) before they were all out.

Seam-bowler Footitt did his best to get them back into the game as he picked up the early wickets of Luke Wells, who passed 2,000 first-class runs before edging into the slips, Chris Nash and Rory Hamilton-Brown.

And he then excelled in the field by taking a superb one-handed catch at square leg to dismiss Brown for 10 off Clare, who had earlier accepted a chance offered by Gatting off his own bowling.

With skipper Ed Joyce absent for family reasons, Jordan arrived in the middle with his side 109-5, but with Yardy's reassuring presence at the other end, he grew in confidence and went past his previous career-best of 79 not out.

A short rain delay may have affected Jordan's concentration, however, as after Yardy reached three figures he fell short of a a maiden hundred when he fended a rising ball from Tim Groenewald to second slip.

Magoffin and Anyon then departed in successive overs, but Yardy was unmoved as he and Monty Panesar saw out the day.