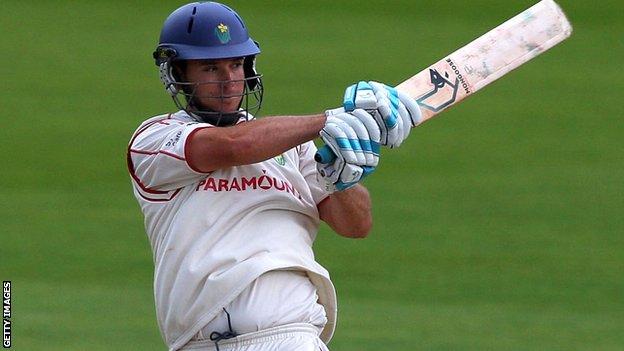 Veteran seamer David Masters collected another five-wicket haul as Essex bowled out Glamorgan for 231 on the opening day at the Swalec Stadium.

The 35-year-old took 5-44, with only Jim Allenby and Stewart Walters making significant scores for the home side.

Walters was caught at cover off Reece Topley for 67 and Allenby got to 77 before he was lbw to Ravi Bopara.

Essex struggled in reply, losing Tom Westley and nightwatchman Masters to Michael Hogan, as they closed on 10-2.

The inability to build partnerships cost Glamorgan dear after they were put in to bat, with the Essex seamers making good use of a helpful pitch after Masters had made the early breakthrough when opener Ben Wright offered a bat-pad chance to short leg.

Walters hit eight fours before a loose shot cost him his wicket and if Dean Cosker (18) had not kept all-rounder Allenby company for 24 overs in an eighth-wicket stand of 71, the Welsh club could well have failed to register even a single batting point.

However, the day ended positively for them as Australian Hogan bowled Westley for a duck with his fourth delivery and then had Masters leg-before for four.

"At a 142-7 midway through the afternoon James Foster's decision to field first appeared to have been vindicated. But Jim Allenby and Dean Cosker's fightback gave the Glamorgan bowlers a total to defend.

"Essex were left with a tricky seven overs at the end of the day, especially with Glamorgan's Australian opening bowler Michael Hogan having already showed good form this season.

"He dismissed Tom Westley with his fourth ball and then removed nightwatchman David Masters, who was asked to go in after earlier taking five wickets, giving Glamorgan a real boost at the end of a tough day's play."