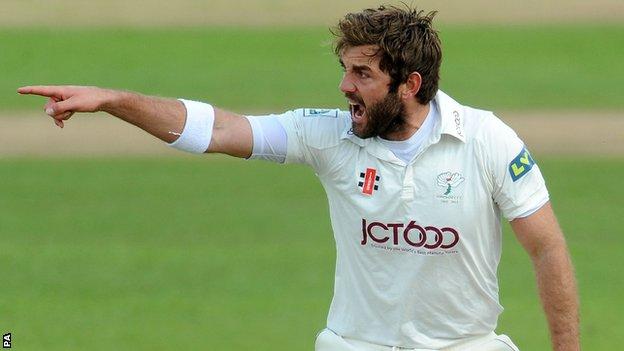 Liam Plunkett produced a reminder of the form that once won him nine England Test caps as Yorkshire skittled Warwickshire for 128 at Edgbaston.

Pace bowler Plunkett took 5-32 as the reigning champions were skittled out in 51.3 overs after a delayed start.

He was supported by Steve Patterson (3-46) and Ryan Sidebottom (2-23) as only four batsmen reached double figures.

Home skipper Jim Troughton ran out of partners on 65 not out and Yorkshire replied with 11-0 before the close.

It was a sobering experience for Warwickshire, who unsurprisingly were put in to bat when Andrew Gale won the toss after the morning session was washed out.

Sidebottom only conceded six runs in an eight-over spell with the new ball that brought him the wicket of Varun Chopra, caught at second slip for four, and later returned to bowl Rikki Clarke with a perfect inswinging delivery.

But it was Plunkett, signed from Durham over the winter, who proved the main threat as he nipped out Will Porterfield, Darren Maddy and Tim Ambrose - the last two for ducks - in his initial burst and then cleaned up the tail to leave himself on a hat-trick at the start of Warwickshire's second innings.

His figures could have been even better if Adam Lyth, who took three slip catches, had not dropped Troughton on 47 as the left-hander battled in vain to try and salvage something from the Warwickshire innings.

Lyth and Joe Sayers played out five overs safely before the close, and the visitors will hope for conditions to be less bowler-friendly on day two as they try to bat Warwickshire out of the game.

"The first was to lose the toss in helpful bowling conditions after the groundstaff's impressive efforts to dry a sodden outfield, and the second was to run a single off the first ball of a Liam Plunkett over with eight wickets down.

"The former England bowler gleefully claimed the scalps of the last two batsmen with his next two balls to complete a five-wicket haul and leave Troughton stranded.

"Yorkshire's three main pacemen took advantage of the conditions with penetrating and accurate bowling and Warwickshire's attack will have to match them if they are to get back in the game."