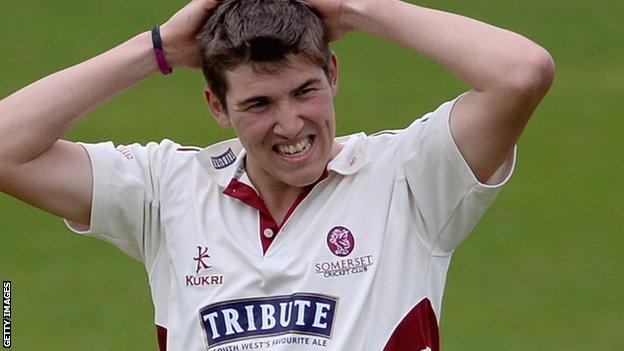 Jamie Overton and Jack Leach shared seven wickets as Somerset fought back on the opening day in Taunton.

The hosts won the toss and elected to field, but Middlesex started well with Chris Rogers (57) and Sam Robson (42) putting on 76 for the first wicket.

Robson fell to Overton (4-65) before Joe Denly hit 55 as the visitors continued to dominate on a green pitch.

But Somerset came back in the afternoon and, despite Neil Dexter's 73 not out, Middlesex struggled to 293-8 at stumps.

Somerset captain Marcus Trescothick, hoping to lead his side to their first County Championship victory of the summer, would have been hoping to make early inroads having won the toss and put Middlesex, who currently lie second in Division One, in to bat.

However, Robson, coming into the match off the back of scores of 129 and 215 not out in his last two innings, and Rogers made light of the conditions, before Denly's season's-best 55 took the visitors to 158-1.

But Rogers, Denly and Dawid Malan all fell in the space of 11 deliveries as Somerset fought their way into the match.

Spinner Leach (3-36) dismissed John Simpson and Gareth Berg cheaply, Lewis Gregory saw off James Harris for nought and the late dismissal of Toby Roland-Jones by Overton left Dexter in danger of running out of partners and Somerset probably the happier of the two sides at the close.

"Middlesex will be slightly the happier of the two teams as they reflect on the opening day at Taunton.

"Having won the toss, Somerset were hoping for early wickets but the visitors' openers, Sam Robson and Chris Rogers, once again showed their class with a solid start on a very green track.

"At 158-1, Middlesex looked as though they'd seize complete control of the day but the outstanding Jamie Overton led the fightback as a middle-order collapse set in.

"The tall, pacey bowler, who was a constant threat as he found a great deal more bounce and movement than his more experienced colleagues, already has career-best figures and is now on the verge his first five-wicket haul in the Championship.

"Neil Dexter's return to form with the bat continues and he will hope the last two wickets can support him on the way to what would be a first century of the season.

"If the club captain, who hopes to resume as skipper of the Championship side in the future, does manage it then Middlesex will be nearing a more than useful total of 350."