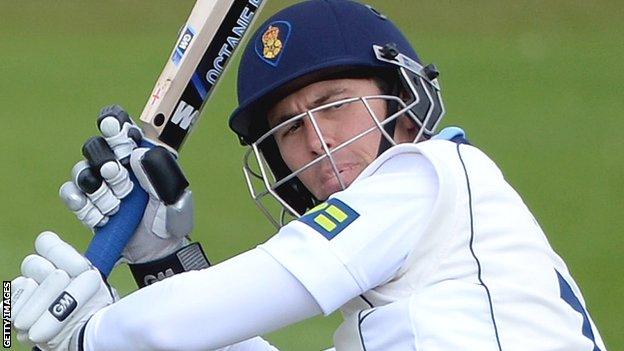 Derbyshire captain Wayne Madsen scored a half century but Sussex had the better of a rain-hit opening day.

After a three-hour delay, Chesney Hughes gave the hosts a lively start with a six in his quick-fire 15.

Madsen (63) steadied the ship, but he and Alasdair Evans fell in the final five balls of the day as the hosts closed on 158-6.

Monty Panesar claimed the wicket of Evans in what was only his fourth over of the day.

Earlier, 35 overs were lost to the bad weather but Hughes made up for lost time with 15 from 23 balls.

Derbyshire lost wickets at regular intervals and Shivnarine Chanderpaul (20) struggled for 87 minutes on his 300th first-class appearance, but only Dan Redfearn failed to reach double figures with a nine-ball duck.

Madsen's three-hour innings looked to have given Derbyshire at least honours even, but Jordan and Panesar struck late on to swing the day in Sussex's favour.

"Despite no play until the afternoon because of the wet weather, Sussex were able to take six Derbyshire wickets by the close.

"The hosts batted steadily with Wayne Madsen impressing, but a flurry of quick wickets for Steve Magoffin and Chris Jordan hurt them.

"Sussex continue to look lethal with the ball, while Derbyshire continue to find life in Division One challenging."